This week in safety: What's in that basket? 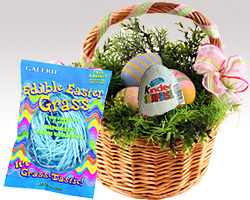 This week a colleague drew our attention to edible Easter grass being sold to stuff those baskets of goodies that children will soon be finding. Although one brand calls the product "Grass-Tastic!" we disagree. This product falls into our basket of things we think should not be marketed to children because they blur the line between what's safe to eat and what's not.

We wrote about the confusion between toys and food earlier when Kellogg's was selling colored, gummy candy blocks shaped like Lego bricks and some other companies were marketing "candy" perfume and crayons.

It's not illegal to sell candy that looks like toys or vice versa, but it's a really bad idea. Adults know the difference between green plastic grass and "edible" grass but small kids don't. In the U.S., however, it is illegal to embed non-edibles in sweets. That is exactly what Kinder eggs do. We've been told by their faithful fans we just don't understand how great they are. But the eggs have been banned in the U.S.  since 1997, when the Consumer Product Safety Commission warned that the toys could pose a choking hazard to children under three. Enjoy the holidays and the rest of this week's news.

CDC to Americans: Don't trip over your dog
The Wall Street Journal
We found an item in this week's CDC Morbidity and Mortality Weekly Report inexplicably fascinating: A detailed accounting of the ways Americans trip over their pets. This is not, as it turns out, a trivial issue: More than 86,000 Americans wind up in the emergency room every year because of falls related to cats or dogs. Read more ...

Prosecutor accuses Macy's of stalling investigation of tainted jewelry
The Los Angeles Times
Macy's department store has refused to give prosecutors the names of customers who purchased children's jewelry made with potentially toxic lead, according to an official with the Los Angeles district attorney's office. Read more ...

What's In my plastic? A closer look at phthalates
NPR.org
Phthalates have long been used to make plastics soft and flexible, but recent public concern has prompted lawmakers to ban six of these chemicals in toys and other kids' products. However, the Consumer Product Safety Commission, charged with enforcing the ban, found that the exposure from kids' toys is too low to be a risk. Read more ...

San Mateo brings pool up to snuff with new law
The San Francisco Examiner
Just in time for warm weather, the city of San Mateo is upgrading its public swimming pool to meet standards required by a new federal law. Passed in December, the Virginia Graeme Baker Pool and Spa Safety Act requires that every pool in the country be fitted with special drain covers to prevent injuries, and possibly death. Read more ...

Brain injury no accident, MD says
The Toronto Star
In his four decades as one of Canada's top neurosurgeons, Dr. Charles Tator has seen thousands of catastrophic brain and spinal cord injuries. But he has seen precious few "accident" victims wheeled through his operating room doors. Tator's patients have one thing in common. "In more than 90 per cent of cases, the trauma was preventable," he says. Read more ... 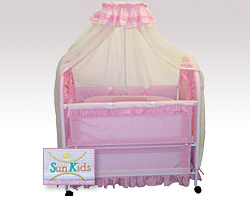 This week there was a relatively small recall of a crib with mesh sides but we want to bring it to the attention of parents because children have died in this type of crib before. The sides of the crib are made of mesh that expands, creating a gap between the side and the crib's mattress. A young child can slip into this gap and become entrapped or suffocate. This week's recall involved 1,900 SunKids convertible cribs. Although there have been no injuries reported with this crib, the CPSC is aware of the death of a 5-month-old child in August 2008 involving another company's nearly identical crib that was recalled. The child became entrapped between the mattress and the mesh side and suffocated.