Health Weekender: It's Father's Day—don't spend it in the ER 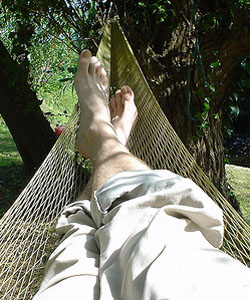 A couple of years ago on Father's Day, I spent the day with a group of friends at the local BMX (bicycle motocross) track. The dads were all geared up to take a lap around the track. It was, after all, their day. Outfitted with bikes and helmets, eight dads stepped up to the challenge and as the gate dropped, so did two bodies. In fact, only 2 of the original 8 finished the course, and two of them were whisked away to the emergency room. At the ER, a doctor mentioned that Father's Day is one of their busiest days.

According to the American College of Emergency Physicians (ACEP), sports injuries aren't the only incidents sending dads to the hospital. Falls related to alcohol consumption, even in moderate amounts, greatly increase dad's chances of a not-so-fun ride in an ambulance. On top of that, most men have let themselves go with age. That's right–most! The ACEP reports that "In the 35-54 age brackets, 73 percent of men are overweight." Shocking? Take a gander in the mirror big boy.

So, as we celebrate dad this Sunday, let's try to make sure he's around and healthy to celebrate again next year. According to David Gremillion, MD, FACP of the Men's Health Network, men in general seem to be behind the curve when it comes to keeping themselves healthy and active. Here are a few observations Dr. Gremillion's found when comparing men to women:

Those are trends that we can change, guys! Here are some resources to help the dads among us to be healthier:

Let's put the "happy" back in "Happy Father's Day" by making this dad's day healthy, safe, and fun.

Get gift ideas for Dad, and before you shop, see our Ratings for treadmills, exercise bikes, electric shavers, and ellipticals (subscribers only).