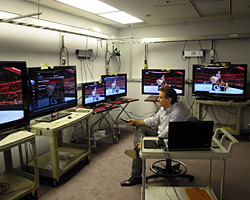 Looking for a ray of sunshine in this gloomy economic environment? Well, if you're in the market for a new HDTV, you don't have to settle for less than very good picture quality, even if you're on a budget.

In fact, in our just-posted LCD and plasma TV Ratings (available to subscribers), all but three of the 60 models we tested delivered very good or excellent picture-quality performance on all types of programs. And nearly half of the sets we tested earned top marks for HD picture quality.

As in recent Ratings, we're seeing more LCD sets that address traditional weaknesses, helping to boost overall performance. For example, many larger—and even a few smaller—sets have 120Hz refresh rates, which can help reduce motion blur in fast-moving scenes. We're also seeing more "240Hz" sets—both those that actually quadruple the TV's frame rate, as well as others that combine 120Hz technology with a scanning, or flashing, backlight to achieve a 240Hz effect.

LCD models with LED backlights, instead of fluorescent lamps, are also becoming more common. In our just-posted Ratings, you'll find LCD TVs from Samsung and Sony that use "full-array" LED backlights, which can be locally dimmed, as well as other ultra-slim "edge-lit" models with LEDs placed around the perimeter of the set. We found some benefits and tradeoffs to each approach.

While we've seen many LCD improvements, a narrow viewing angle is still an issue with many sets, so the picture will deteriorate when you move away from the center of the screen. That's why we advise that you check the viewing-angle scores in the LCD Ratings if you think the set will regularly be viewed off-angle to ensure you'll get the picture quality we describe in our Ratings.

Although there are fewer manufacturers and brands, plasma TVs continue to do well in our Ratings, and are an excellent, well-priced choice in the larger screen sizes. Almost all the new plasma models now have a technology called "600Hz sub-field drive." This technology addresses an issue that, frankly, hasn't been a real plasma problem: motion resolution, or blurring during fast-moving scenes. Using specially designed test patterns, plus a few movie scenes designed to show off this flaw, we found that this new technology can indeed minimize blurring. But the improvement was more evident in sets from some brands than others.

Both LCD and plasma sets are adding new features, such as the ability to directly access online content, including streaming movies from providers such as Netflix and Amazon Video on Demand, as well as Web-based services from companies such as YouTube and Flickr. Some sets incorporate onscreen "widgets," developed by Yahoo, to provide easy access to these sites and services. A few companies now offer optional wireless access to home networks, so you don't need an Ethernet jack near where your TV is situated.

As we mentioned when our previous TV Ratings were posted, we've increased the pace of our TV tests, so Ratings will be posted faster than they have been in the past. In fact, we're already well under way in our tests of 15 new models, including LCD sets from LG, Samsung, Sharp, Sony, and Vizio, plus new plasmas from Insignia and LG, as well as Panasonic models in four different series. Keep checking back regularly for the latest TV Ratings. —James K. Willcox