Not just for pigs and humans: Swine flu advice for your pets 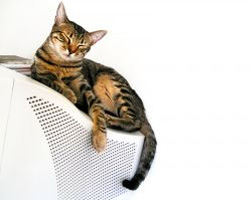 Add cats to the list of animals that have caught the H1N1 (swine) flu. Last week there was a flurry of reports that a 13-year-old Iowa feline had tested positive for the virus. The cat is reported to have fully recovered. But should you be worried about your pet catching swine flu? And can you get the flu from your pet?

According to the Centers for Disease Control and Prevention, your pet should be more wary of you than the other way around. While there are reports of some animals getting the flu from their pet parents, there appears to be no evidence of pets spreading the disease to humans. Ferrets are particularly susceptible to influenza--a trait that has led to the mammal being a subject-of-choice for influenza studies.

On the other end of the spectrum, there are no reports of dogs catching the swine flu, but our "best friend" remains susceptible to a different strain of flu, canine influenza. Poultry, including turkeys, have been infected with H1N1 already, but it's unknown if pet birds are susceptible to the virus. And while it's known that pigs can catch the swine flu, it's not clear if any of the potbelly variety, which are popular as pets, have come down with the H1N1 flu.

The signs for flu in animals mirror that of humans and can include lethargy, loss of appetite, fever, runny nose, runny eyes, sneezing, coughing, or changes in breathing. Canine influenza has the same symptoms, as does "kennel cough." If your pet has any of these symptoms, contact your veterinarian.There's no pet vaccine for the swine flu, and to prevent spreading the disease to your pets, treat them like any other member of your family. Keep them away from sick people and other sick pets. Wash your hands frequently and cover coughs and sneezes. If your pet appears ill, try to keep him or her away from other animals—and if you have more than one pet, try to keep separate food and water bowls and avoid sharing toys.

There is a vaccine available for canine influenza. It is typically recommended for dogs that either take part in activities with a lot of other dogs, or who are live in communal facilities. Talk to your veterinarian if you think your dog should get the canine flu vaccine. And see the American Veterinary Medicine Association for information on canine flu, and swine flu in pets.

Keep up with our swine flu coverage and recommendations.