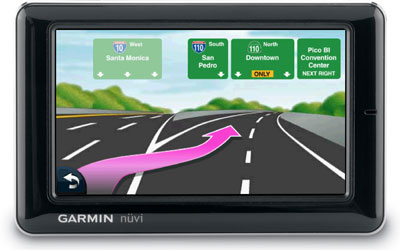 Premium navigation devices are distinguished by their rich feature sets and real-time information. The all-new Garmin Nuvi 1690 is a full-featured model with a wide screen, reality view, Bluetooth, multi-destination routing, and spoken street names. But what really sets it apart is that it uses a cellular modem to receive information through nuLink Services, rather than use FM-sourced traffic data.

However, the Nuvi 1690 lacks features found on some other upscale Garmin units, including an MP3 player, FM transmitter, 3D buildings, and voice recognition. Admittedly, these features may not matter to most shoppers, though it does underscore the importance of reviewing the specifications for each model you are considering. (See our complete GPS ratings and specifications.)

We paid $430 for our Nuvi 1690, with a two-year data subscription to nuLink Services included. Once the trial period ends, the nuLink service is $5 a month.The connection is made through AT&T's network, which is also the sole carrier for the Garim Nuvifone. (See our full Garmin Nuvifone G60 review.) 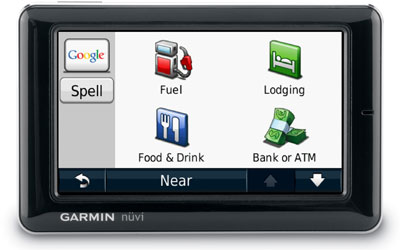 Initial impressions
The Nuvi 1690 is similar to the many Garmin GPS units we have tested. Being similar to other, well-rated models, it is no surprise that the 1690 has the features, easy-to-use interface, and good navigation guidance to excel in our testing.  Where it stands out is with connectivity, as it raises the bar by providing useful information on a more consistent basis than with previous devices.

Most of the features provided by Garmin nuLink were already present on Garmin devices that received information from MSN Direct.  A recurring criticism with the MSN service has been that it frequently takes a long time to acquire any data, and often no information would be supplied at all.  In our initial testing, the nuLink service has been much more consistent, and it reports data very soon after the device is powered on.

The most used feature of the nuLink is the live Google search, which provides more current, local points of interest (POI) listings than the databases that come with a typical PND. Further, it introduces the ability for user ratings of selected POIs.

We have found that other connected services can come in handy, too, such as gas prices, local events, and weather information. The traffic service is ad-based Navteq traffic that is offered free on many Garmin models.  There is no claim of crowdsourcing traffic pattern data, but curiously a user is prompted to share location and speed data at start up.  Hopefully this connectivity will progress to supplement traffic reports.

Garmin typically scores well in our tests with limited complaints, but that does not mean they are perfect.  For some time now, we have consistently mentioned some improvements we would like to see on the Garmin products—now including the Nuvi 1690, as well.  We would like to see the ability to exclude roads from a given route, as well as a more robust detour function.  It also would have been beneficial if the 1690 was given the full feature set, including those functions found on the 700 series devices. As a premium unit, it would have been preferred that the Bluetooth connectivity use A2DP technology that would enable higher-quality audio for streaming to the car and head sets. This feature would also warrant the MP3 player feature.

One of the biggest drawbacks for the 1690 is the new mount design.  Most premium mounts have a simple button for quick release of the device that leaves DC power cord with the mount.  The 1690's mount does connect directly to the power cord, but it is a cheaper design that clips the device into the cradle.

CR's take
Following the trail blazed by TomTom with the 740 Go Live, the Nuvi 1690 finally brings cell-based connectivity to the Garmin line. The Nuvi 1690 is well done, with some room for improvement (inevitable on future model variants). Its features and price are comparable to the TomTom 740 Go Live, but the 740 Go Live includes just three months of free service. After that, the monthly fee is $10—fully twice the Garmin rate. A good, intuitive device, the Nuvi 1690 has a real advantage in overall ownership costs.

The Garmin Nuvi 1690 will be added to our online GPS ratings this week.