Are you living peanut-free when you needn't be? 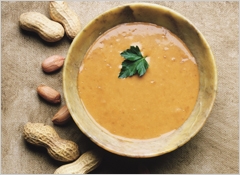 A peanut allergy is nothing to sneeze at. For those affected, even a slight exposure to the nut may cause a rash, nausea, vomiting, sneezing, swelling of the face and throat, and difficulties breathing, which can be fatal. Prompt medical attention can treat serious reactions, but there's no remedy for the allergy itself. So peanut avoidance becomes a way of life for the allergic, as they pore over packaging to ferret out foods containing peanuts, peanut oil, or even trace amounts of the nut (which is actually a legume). And as the peanut is quite pervasive in prepared and packaged food, this is no small task.

But could all this effort be unnecessary for some? A new study suggests that many people diagnosed with a peanut allergy through standard tests may not be truly allergic.

The study included 933 8-year-olds who were tested for a peanut allergy using two common tests. First, they had a skin-prick test, which inserts a small amount of peanut protein just below the skin to see whether it provokes a skin reaction. The children then had a blood test to check for IgE antibodies, which are produced by the immune system in response to allergens.

The researchers then gave brownies containing peanuts to the children who had positive tests, to see if they were really allergic. This test (called a food-challenge test) was done with careful safety monitoring and with doctors on standby. Children who had a definite history of reactions to peanuts were not given the brownies.

The results were striking. Only around 2 in 10 of the children who'd tested positive for a peanut allergy had an allergic reaction to eating the nuts. That means that nearly 8 in 10 children would have been wrongly told they were allergic to peanuts, based on these tests.

This was a well-run study that involved a large group of children, so it's likely that the overall results are fairly reliable. However, the food-challenge test was quite strict—the children needed to show two or more symptoms from a specific list to be classified as allergic after eating peanuts. So it's possible the test might have underestimated the number of children with a true peanut allergy.

Even so, the study raises questions about the accuracy of the tests commonly used to diagnose peanut allergies. Although the skin-prick and IgE tests can detect a peanut sensitivity, this doesn't always equal a peanut allergy, say the researchers. That is, your immune system may respond to peanut proteins without your body ever developing a rash, breathing problems, or other signs of an allergic reaction. Although these standard tests can confirm an allergy once a person has had a reaction to peanuts, they may be less accurate in diagnosing the allergy in someone who hasn't had a reaction. This could be the case if someone is tested because a family member has a peanut allergy, or because they have other food allergies.

Food-challenge tests are considered the most reliable of the allergy tests, but they are time-consuming to conduct, and not without risk. However, new blood tests for peanut allergies are showing promise, including one that was tested on the children in this study who'd had positive standard tests. The new blood test wrongly diagnosed only 7 percent of children, compared with nearly 80 percent for the standard tests. But more research needs to confirm these findings.

What you need to know. If you or your child has been diagnosed with a peanut allergy based solely on a skin test, IgE test or both, this study suggests there's a chance you might not be truly allergic. But don't put this to the test with your own batch of peanut-enriched brownies. Instead, talk to your doctor. They will be able to review your diagnosis with you and may recommend further tests.

ConsumerReportsHealth.org has partnered with The BMJ Group to monitor the latest medical research and assess the evidence to help you decide which news you should use.