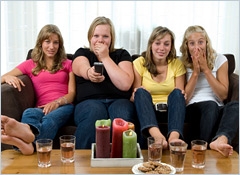 Last year, four of the top five programs ranked by Nielsen were reality shows. It seems no topic is too crass or mundane in many of them, which has led some critics to argue that reality TV has ruined America. I agree that reality TV has encouraged some really bad conduct (remember the White House gate crashers and the Balloon Boy Hoax?). But my greater concern is that in some instances it seems to glamorize risky behaviors. Teens are particularly impressionable given that young cast members are viewed as celebrities, even when shown as 16 and Pregnant, or 16 and wasted as in NYC Prep.

I'm especially concerned about the potentially dangerous health consequences from activities in tattoo parlors on TLC's Miami Ink (or their L.A., Rio, or London counterparts) and the tanning salons like those depicted in the docusoap Kell on Earth. In a March episode, Andrew, a tanorexic cast member, complained that he was "ridiculously pale" because he hadn't tanned for four days, and recklessly proceeded to enter a tanning booth sans protective goggles. And while Jersey Shore star Snooki told Jay Leno that she'd like to change the world by putting a tanning bed in everybody's home, American Idol judge Simon Cowell has reportedly just installed a private tanning salon in his new Beverly Hills home.

Even though exposure to tanning beds before the age of 30 increases a person's risk of developing melanoma by 75 percent, this real danger is dampened by TV shows that depict it as trendy and fashionable. One study of university students found that more than 90 percent of tanning-bed users know about the risks of premature aging and skin cancer but continue to tan because they think it looks good. So popular is the activity that it, too, has even inspired two reality series: Sunset Tan, which chronicles the lives of the managers and employees of a Los Angeles tanning salon, and Tanners Point, about "Life, Love & the Pursuit of the Perfect Tan".

It's clear that better measures are needed to control this madness. Thankfully, it will soon be more costly to get those indoor rays. As of July, tanning salons will charge customers a 10 percent tax as a result of the passage of the new health-care bill. And because that may not be enough to deter teens, an FDA Advisory Committee just recommended that kids under 18 be barred from using tanning beds or be required to have a signed consent form from their parents. This is a good start, and in a recent Consumerist poll, 75 percent of more than 2,000 responders agreed.

But we can't rely on the industry regulating itself. A 2005 Consumer Reports survey of nearly 300 tanning facilities across the country found evidence of widespread failure to inform customers about the possible risks, and to follow recommended safety procedures, such as wearing eye goggles. Many facilities made questionable claims about indoor tanning, such as saying that it's safer than sunlight.

What we really need to see is a reality TV show based in a dermatologist's office. I bet it will take only one season of Miami Skin to give tanners a much-needed reality check.

Read more on the risk of skin cancer from tanning beds, and take a look at the common risk factors for melanoma.