Heels over head for bike safety 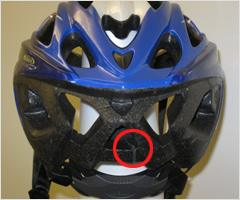 It's bicycle season, as avid riders and novices alike hit the streets. But often lost in the enjoyment and excitement of a first ride or a first-ever bike is the need for safety gear, particularly a bike helmet.

The picture at right shows my helmet after an over-the-handlebars excursion earlier this month. At the time I was traveling about 8 mph on a slight downhill, when I used my left arm to signal to the cars behind me that I was making a right-hand turn at the upcoming intersection.

Unfortunately, I didn't see a pothole hidden in the shadows. A quick jerk of the handlebars to the right and I was fighting for control. I hit the grassy curb and was thrown off my bike. Luckily I was able to tuck and roll, but the impact was still significant. I landed directly on my back and right shoulder, and hit the back of my head on the ground.

As you can see, the helmet did its job, sacrificing its life to save mine by absorbing the energy—compressing and cracking from the impact. I have no neurological problems from the accident, though my two cracked ribs, sore left wrist, aching lower back, and bruised right shoulder are (painful) reminders.

I've been riding road bikes for more than six years now, logging thousands of miles in a variety of short- and long-distance rides while wearing the silly looking clothes. I don't ride as if I'm in the peloton, running traffic lights and stop signs in the need to keep up my cadence. Rather, I follow all traffic laws.

But until my accident I never had a serious fall. And while I never considered not wearing a helmet, the protection it provided was something I had taken for granted. And because my helmet was properly positioned and secured it stayed on my head during impact.

Look at the crack, which came from my landing on a grassy area, and think about how much damage could have occurred if I wasn't wearing it. Then, consider the result if I had landed on the road without wearing a helmet. A well-made, properly worn bicycle helmet is a must for any child or adult who plans any pedal time this spring and summer. And make sure your helmet is up to the task. Consumer Reports recommends replacing a bicycle helmet every five years or after an impact. Child helmets may need to be replaced sooner if your son or daughter outgrows one.