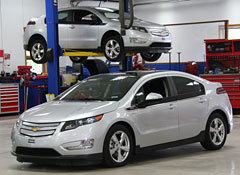 The Chevrolet Volt is one of the most-hyped cars expected to debut this year, with all-new drivetrain technology that General Motors has termed EREV, translated as "extended-range electric vehicle."

Yesterday, the company brought two examples up to our test track, along with several engineers to explain the car, point out its new features, and allow the staff to get behind the wheel. GM drove the two cars to our Connecticut Auto Test Center from Milford, Michigan—a trip of about 750 miles.

What we learned:
The most common reaction to driving the Volt is that it is quiet and the linear power delivery provides good acceleration, but the sedan feels heavy in the corners. It weighs about 3,800 pounds, making it porky for a car of this size.

The Volt will initially be sold in Los Angeles; Washington, DC; and Michigan in November. Within about a year, GM plans to have them available at select dealers nationwide. Chevrolet is expected to announce the price this summer.


Overall, it's an impressive piece of technology, but the proof will be how it performs in the real world. We look forward to buying our own Volt and putting it through our full test regimen once it goes on sale.

Visit our guide to alternative fuels and guide to fuel economy.