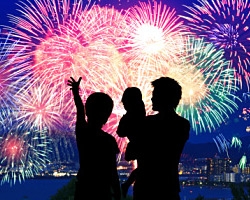 Did you know that in the weeks before and after the July 4 holiday, there are about 200 fireworks injuries a day? Last year, that added up to nearly 6,000 reported injuries—mostly burns and lacerations to the hands, face, and head. And a new U.S. Consumer Product Safety Commission study indicates that in 2009, there were two deaths and nearly 9,000 emergency room visits for injuries resulting from fireworks-related incidents. Sadly, most of the fireworks injuries affected those under age 20, and in many cases, resulted in lost limbs. And as CPSC Chairman Inez Tenenbaum noted in a statement this week, "Fireworks-related incidents, especially those involving illegal fireworks, can be fatal."

The CPSC also reminds parents of young children that sparklers are no safer than other fireworks—since parents may be under the impression that they are safer. The agency's press release notes that parents often don't realize that there are many injuries from sparklers to children under five, and that sparklers burn at temperatures of about 2,000 degrees Fahrenheit—hot enough to melt some metals.

Safe Kids USA's policy on kids and fireworks, supported by the American Academy of Pediatrics and The National Fire Protection Association, is that consumers should never use fireworks around children or around structures that may catch on fire. Even sparklers can burn children or set their clothing on fire. Families are encouraged to enjoy public outdoor fireworks displays put on by trained professionals.

But if consumers do use fireworks, they should only use legal ones, and follow the CPSC's safety tips, below. If you choose to operate fireworks: