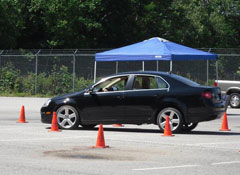 Teenagers are four times as likely to crash than older drivers. Each day, about nine teenagers between 16 and 19 years old die from motor vehicle injuries. Those startling facts from the Centers for Disease Control and Prevention (CDC) underscore the problem of teen driving. While there many well-established programs focusing on drunk driving and seatbelt use, there is too little discussion about teaching our least experienced drivers car control.

"Driving School" usually refers to a program that teaches young drivers the rules of the road and how to operate a car. There are also performance schools that can teach drivers how to get the most out of their cars and find the best line on a racetrack. But there is a third type of school that is becoming more and more prevalent - ones focused on teaching teenagers car control and how to avoid an accident. We decided to take a look at one by sending four teenagers through a school and evaluating their driving skill before and after the instruction. 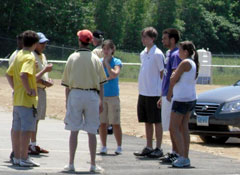 We tried the nationally available Street Survival course, a joint venture of Tire Rack, Sports Car Club of America, and BMW Car Club of America. The program costs $75 for a full day of instruction - about the same price as a pair of sneakers.

There are other courses across the country that offer similar training such as the Driver's Edge and the New Driver Car Control Clinic. Costs range from free to about $400. Most include instruction in a classroom and while driving in the teenager's own vehicle.

Prior to the course, it was apparent that none of the drivers were "hot shoes." In fact, I was relieved that I didn't have to work with the 17-year-old version of myself with something to prove. The students had from six months to three years of driving experience, and three had attended private driving schools but had no experience with car-control training.

Before we sent the teenagers to the school, we evaluated them at our test track. Each student drove around a dry skid pad and through an autocross. Two of our female volunteers drove around the skid pad well below the cars' limit and appeared a bit frightened at the speed they attained. Our two male students were both able to squeal the tires. On the autocross, all drivers drove rather slowly and only one actually kept both hands on the wheel. Still, some of them got into heavy understeer situations by misjudging corners.

Next we sent the students to school. During the full day of instruction they drove in their own cars with trained instructors by their side. All the teens thought their instructors were friendly and very helpful. 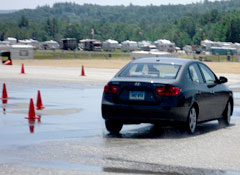 The students practiced several dynamic maneuvers on the course, including braking around a corner, a battery of lane changes, wet and dry figure eights, and a skid pad session where the instructor would provoke oversteer by pulling the parking brake. Most of the experiences were well received, the students said, but learning to cure oversteer was the most useful and most challenging. On the other hand, learning to threshold brake was not nearly as useful since all cars had antilock brakes (ABS). For cars equipped with ABS, your best bet is to slam the brakes hard for the shortest stop. The students also received classroom instruction that ranged from lessons on defensive driving techniques to demonstrations on setting the best driving position. Each student received a handbook for both them and their parents.

When we re-evaluated the teens at our track, the differences were easy to see. On the skid pad, all four students were able to get their tires to squeal and the two females didn't have frightened expressions anymore. On the autocross they were more confident, and all but one now used both hands at all times. While each teen clearly appeared more confident, we didn't create any race car drivers—none drove past the limits of their cars. They all agreed that the course would be best suited to drivers as young as possible before they establish bad habits. Some also felt they were already such seasoned drivers that the course was unnecessary, despite the fact they improved after the course. All felt more confident in their abilities and would recommend the course to their friends.

It isn't just our informal example that shows progress. According to a recent study by Florida's Department of Highway Safety and Motor Vehicles, graduates from a teen defensive driving school had cumulative crash rates 77 percent lower than the general 15-to-19-year-old population.

We think the small investment in teen driver education will pay large dividends. Each of our teens increased their confidence behind the wheel and potentially learned the skills that could help them avoid an accident.


One of our teen drivers summed it up best: "While this course cannot address all of the obstacles young drivers face, it helps teens to become defensive, confident drivers with a good idea of the limits and capabilities of themselves and their cars."

Have you or your teen attended a defensive driving school? If so, share your experience in the comments below.


Learn more about car safety, and see our guide to kids and car safety.