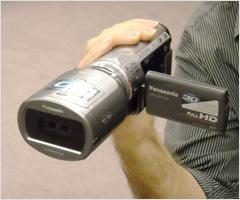 The big 3D consumer electronics rollout continues with the introduction of the Panasonic's first consumer-grade 3D camcorder, the Panasonic HDC-SDT750K. I recently blogged about using the Fujifilm's FinePix Real 3D W1 digital camera, which impressed me when I viewed its 3D photos on our reference 3D plasma display. So it was with great anticipation that I greeted the arrival of the HDC-SDT750K at our lab.

With visions of spectacular 3D videos dancing in my head, I took the camcorder to New York City. It looked and felt like a regular camcorder, though when I was in the field I did get the occasional stare from passersby as they eyed its oversized 3D lens. It has the usual flip-style LCD display for reviewing videos, but you can't tell how realistic the 3D effect is until you view the videos on a 3D TV. On my little trip, I shot city streets, people walking, and buildings, while keeping subjects in both foreground and background to maximize the 3D effect. When I got back to the lab, I shot some more video to see how the 3D effect would fare in an indoor lighting. Then I connected the camcorder to the TV (with the supplied HDMI cable) and put the TV into "side-by-side" 3D mode.

The 3D experience wasn't very compelling. There wasn't enough depth between foreground and background, certainly less than I'm used to with broadcast 3D programs. Nor was the effect at all like that in the Fuji W1's photos, which had really pulled me in. I'm not saying I didn't see any 3D effect. The images definitely showed more depth than those shot with a normal 2D camcorder. But not much more. 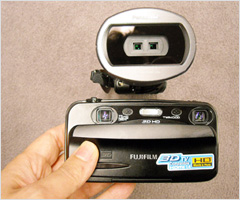 The lenses of the Panasonic camcorder (top), are
only 0.5-inches apart, compared to the 3-inch
separation found on the Fujifilm W1 camera.

I suspect this is due to the fact that the HDC-SDT750K's two lenses were only about one-half inch apart. By comparison, my eyes are 2.5 inches apart, while those on the Fuji W1 camera are about 3 inches. In normal use, one shouldn't expect a significant 3D effect with just one-half inch separation.

As for resolution, if you're used to the crisp HD images from the best camcorders, you'll be disappointed. The Panasonic's images looked soft, more like standard definition than high definition. This isn't totally unexpected, since the Panasonic presents stereo images in side-by-side 3D format, which, much like 3D broadcasts, cuts horizontal resolution in half. Still, the Panasonic looked softer to my eye than what I'm used to with HD broadcast.

One unusual effect I noticed was that street lights and red lights on the backs of cars appeared somewhat detached from the object, floating, when viewed in 3D. On indoor shots, images looked excessively grainy and as if they'd had visual noise removed, further limiting detail and clarity.

The Panasonic is a notable first attempt at a consumer-grade 3D camcorder. It's fairly compact and its image quality average. But if you're introducing a new feature as significant as 3D, the viewing experience ought to be compelling enough to outweigh the burden of having to wear often uncomfortable 3D glasses for long periods.

For me, the Panasonic didn't deliver a compelling enough 3D experience, but rather a mediocre one. I suggest you view its 3D video yourself on a 3D TV set before you buy an HDC-SDT750K.

As for me, I'm keeping both eyes open to see what comes next.

View and compare all Camcorders ratings.