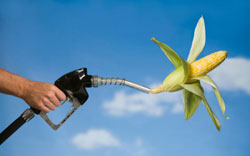 The U.S. Environmental Protection Agency has taken the first step toward what people on both sides of the issue expect to be the full approval of E15 gas, a gasoline mixture with up to 15 percent ethanol. But while the approval pertains only to cars in model years 2007 and later, and the existing mixture of 10 percent ethanol will still be available, the chance for E15 gas making it into engines of outdoor power equipment and other products remains a major concern.

Ethanol has been mixed with gasoline at most pumps for decades but in a typical ratio of about 10 percent ethanol to 90 percent gasoline (E10). Another blend, called E85, is a mixture with 85 percent ethanol that is intended for Flexible Fuel Vehicles (FFVs), which are designed to resist alcohol's corrosive effects.

Numerous parties such as Growth Energy, the lobbying group that filed the waiver application, claim that increasing the percentage of ethanol in gasoline creates American jobs and decreases our dependence on foreign oil. Opposing full approval of the waiver is Follow the Science, a coalition of manufacturers, boat owners, small-business trade groups and other parties that said approval should wait for completion of thorough and objective scientific tests on equipment E15 could harm. Even some car associations, such as the Specialty Equipment Market Association (SEMA), have gone on record against granting the waiver. SEMA opposes it for cars of all ages, including special-interest collector and historic vehicles.

In our initial coverage of the waiver application, we noted numerous problems the Department of Energy found in non-road engines during testing with ethanol blends of up to 20 percent. The EPA approval specifically excludes small, non-road engines from approval. But Kris Kiser, spokesman for the Outdoor Power Equipment Institute, a trade group, voiced concerns that E15 could still make it into gas cans intended for yard equipment—despite pump-labeling requirements the EPA proposed during the announcement.

"What do you do if you're the homeowner, and you own a 2007 car and go gas it up with E15, and then you want to fill up a can for a boat, ATV, snow machine, chain saw or lawnmower?" said Kiser. "This becomes a challenge, and not just from understanding the label. It's highly unlikely that the consumer will activate more than one pump."