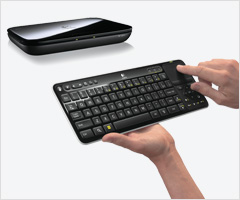 If spending $1,000 or more for a new "Google TV" just isn't in your budget, Logitech has a less expensive option: the Logitech Revue, an add-on box that brings the Google TV Web-based platform to almost any current HDTV, provided the home has broadband access.

Unveiled yesterday, the Revue—priced at $300—is a small set-top box with built-in Wi-Fi that sits between a cable or satellite box and an HDTV, connecting to each via HDMI connections. Using an included keyboard controller, the Revue provides access to Internet content via the Google TV platform as well as control over receivers and DVRs.

Unlike other Web-connected TVs and Blu-ray players that also offer access to online content, however, Revue brings full Web browsing to the TV. You can use the wireless keyboard to type search requests, and navigation is performed via a touch pad with scroll functionality. There are also Back and Home buttons, plus others for power, volume, and DVR control. You can customize buttons to control other functions.

The Revue is the first of several Google TV-based products that will be rolled out over the next few months. Next week, Sony will debut the first Google TVs, an LCD-based TV series that come preloaded with apps for online content and services including streaming video from Amazon and Netflix, Pandora Internet radio, CNBC, and Twitter. Like the Revue, the TV has a "dual-view" mode that lets you simultaneously watch TV programming while browsing the Web or chatting, allows you to "fling" content from a cell phone to your TV and to use an Android phone or iPhone as a TV remote. (Check out the video, What is Google TV?, at the end of this post to see how Google TV works.)

Revue will be available by the end of the month. Both BestBuy.com and Amazon.com are now accepting preorders. You can also buy the keyboard controller, which will work with other Google TV systems, separately for $100.

In addition to the Revue, Logitech also introduced a few Google TV accessories, including a mini controller ($130), which includes a palm-sized keyboard and touch pad, and a 720p high-def USB camera ($150) with embedded microphones that lets you make video calls from the TV using Logitech's video app.

The company is also releasing two downloadable smartphone apps, which use the company's Harmony-brand remote-control technology to enable iPhones and Android phones to work as Google TV remote controls. The Logitech Harmony for Android app will be available for download from the Android Market for free, and the company expects the iPhone app will be available from the Apple iTunes store for free.

Logitech and Dish Network also announced that Dish will offer the Revue—and related accessories—at a discounted price ($179) to its customers.

While Web browsing directly from your TV is a new and likely compelling feature, the Revue is entering a market that's increasingly crowded with ways of getting online content on your TV. In addition to less expensive standalone set-top boxes, such as Apple TV, Roku and the Boxee Box, more TVs and Blu-ray players now come with this capability built in.

Since Google TV is an open development platform, we'll be watching to see what new services and features will added that could help it stand out from other efforts to integrate traditional TV programming with web-based content. And tune in next week for our take on Sony's first Google TV.