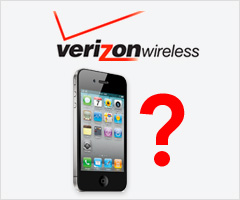 When will we see a Verizon iPhone?
iPhone image: Courtesy of Apple

This week, we saw a deluge of items about the Apple iPhone coming to Verizon—a likely scenario, if only to help Apple combat the growing competition from smart phones with Google's Android operating system. No one is really sure when, but as is typical in the tech world, rumors abound (and curiously, they seem to pop up right around the time a slew of other phones launch).

Just a couple days ago, no less an entity than the Wall Street Journal published a story titled "Apple Readies Verizon iPhone. Seems pretty certain, no? "Apple plans to begin mass producing the new iPhone by the end of the year, and it would be released in the first quarter of 2011," the article states. The source(s), however are unnamed and therefore unverifiable.

Both Apple and Verizon have refused to comment (which is no big surprise), though according to the WSJ, Verizon Communications president Lowell McAdam said yesterday, "At some point our business interests are going to align" [referring to Apple]. "I fully expect it, but I don't have anything to say." Not much to go on, there.

On the other hand are equally credible pundits who don't see the iPhone coming to Verizon quite as soon. For example, according to the Seattle Times, despite Verizon's expected rollout of LTE, its newest high-speed network, at the end of this year, the iPhone likely will not be the first smartphone to debut on that new network. The reasoning: Google CEO Eric Schmidt is scheduled to be on stage during the LTE launch event next January, which indicates Android devices will be first on the network.

Cnet also weighed in recently, citing Verizon's CEO Ivan Seidenberg at a recent investor conference. In response to when his network would offer the iPhone, he stated, "We would love to carry it, but we have to earn it." And I'm sure Verizon's working on that!

Further complicating the issue, today the Wall Street Journal reported that even if Verizon gets the iPhone early next year, it may not be a 4G phone. Although the carrier plans to launch 4G service by the end of 2010, it will initally be available only for air cards and modems, not for smartphones. A slower 3G iPhone may not be so attractive to those buyers who have been holding out for their Verizon iPhones.

Who to believe? We'll wait for confirmation from Apple and Verizon before we budget for a Verizon iPhone.

Have you thought about getting yourself an Apple iPhone but haven't yet? Chances are your reasons include not wanting to use AT&T, which has an exclusive lock on the iPhone but hasn't had a stellar service record, according to its customers who help form our Rating of wireless service providers (available to subscribers). Or maybe you're perfectly happy with your Android, BlackBerry, or other smartphone.

Give us your take in comments.