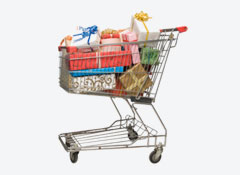 We've been obsessively poring over early Black Friday ads for several weeks now. While we've found many deals to share with you, our electronics team thought these particular bargains might just make it worthwhile to wake up far too early and brave the consumer crowds on the day after Thanksgiving.

Laptops: In a doorbuster deal, Best Buy is selling a Sony laptop with a Blu-ray drive for $500. It includes a Blu-ray video, a subscription to a security software package, and a laptop bag. To take advantage of this early-bird deal, you need to pick up a ticket at Best Buy (they'll be doled out starting at 3 a.m. Friday morning), and quantities are limited to 10 per store.

Desktops: Best Buy will also have the HP Pavilion p6624y with a quad-core AMD processor, 8GB of memory, and a 1TB hard drive. It comes with a 23-inch monitor and a wireless printer. The Black Friday price will be $600; it's currently on the Best Buy site for $700, without the monitor and printer.

E-book readers: The best deal will demand an early morning. Early-birds at Best Buy can save about $50 on the Nook Wi-Fi, which is selling at $99.99 rather than its usual price of $150.

SLR cameras: Best Buy is offering a package that bundles our highly Rated Canon EOS Rebel T2i with two lenses (18-55mm and 55-250mm zooms) and accessories (an 8GB SDHC memory card and camera bag), for just under $1000. The bundled lenses are a plus: With an SLR generally, the more lenses you have, the better.

Point-and-shoot cameras: If you're shopping for a child or teen, Staples is selling the rugged Olympus Stylus Tough-3000 for $150 (originally $210). Since it's waterproof and shockproof, it should be able to withstand some common mishaps.

Camcorders: Among pocket models, Best Buy has a Flip Video UltraHD "package", which includes a few accessories along with the cam, such as an extra battery pack and bag, for $120 (originally around $200, without any accessories). And Best Buy has an HD model on sale: Sony Handycam HDR-C150 for $400 (originally $500).

Printers: For an all-in-one printer that can scan, copy and fax, the HP OfficeJet 6500 Wireless is reasonably fast, quite economical and one of just a handful of inkjets that printed excellent-quality text when we tested it. Staples has it on sale for $79.98 (regular price: $199.98).

Digital photo frames: Sears has our Recommended Pandigital PAN7000DW 6.9-inch frame on sale for $39.99, regularly $59.99. The frame has a gigabyte of memory, and an optional Wi-Fi adapter lets you get photos from your computer and specific photo-sharing sites.