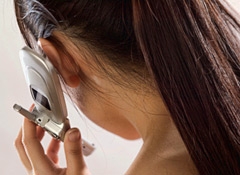 Low-level radiation from cell phones can affect brain function during short-term use, according to a report in the Feb. 23 issue of the Journal of the American Medical Association. The study, conducted by researchers at the National Institutes of Health and the Brookhaven National Laboratory, provides some of the strongest evidence to date linking cell-phone radiation with biological effects. But it's still unknown whether the radiation has any carcinogenic or other harmful effect.

In the study, 47 healthy men and women with a cell phone over each ear underwent two positron emission tomography (PET) scans that measured brain glucose metabolism, a measure of brain activity. One scan was done with the left cell phone turned off and the right one receiving a taped message, but with the sound muted, for 50 minutes. (The phone was muted because sound alone can stimulate brain-wave activity.) The other scan was done with both phones off. The PET scans performed during cell-phone use showed increased activity in brain regions closest to the phone's antenna.

The researchers say it's unlikely that heat from cell-phone radiation caused the increased brain activity. That's important because the Federal government assumes that the only way the phones can harm you is through heat, and so requires that cell phones sold in the U.S. pass a safety test based on their heating potential, says Joel Moskowitz, Ph.D., director of the Center for Family and Community Health at the University of California, Berkeley, School of Public Health.

Those requirements specify exposure limits for cell phones in terms of the Specific Absorption Rate (SAR). The higher the SAR value, the more radiation the body absorbs. The phones used in the current study passed that test, with a specific absorption rate below the legal limit of 1.6 watts per kilogram. (We reported in January that phone manufacturers must package each cell phone with information about its SAR, though there's usually no explanation of what the numbers mean).

The authors of the JAMA article say it's unclear how cell phone radiation caused the observed increased brain activity. One possible explanation is that it stemmed from an increased flow of calcium ions out of nerve cells, which is how nerve cells work when transmitting signals. They emphasize that their current study was not designed to determine whether cell-phone use posed health risks, only to see if the devices had a measurable effect on activity in the brain.

A few observational studies have suggested that some cell-phone users might have a slightly increased risk of certain types of brain tumors. But a spokeswoman for the Food and Drug Administration said in an e-mail that the Agency evaluates the "weight of scientific evidence," and concluded that "heating is the only confirmed mechanism by which radiofrequency energy interacts with biological systems." Moreover, she said, a large body of scientific literature demonstrates that the exposure limits in place protect against adverse thermal effects. And a representative of CTIA-The Wireless Association, a trade group, said in an e-mail that "the peer-reviewed scientific evidence has overwhelmingly indicated that wireless devices, within the limits established by the FCC, do not pose a public health risk or cause any adverse health effects." (The Federal Communications Commission, which also regulates cell phones, declined to comment on the report.)

Michael Hansen, Ph.D., a senior scientist at Consumer Reports, notes that the test used in the study was fairly conservative, since people weren't talking during the test. "Radiation increases when the cell phone is sending an audible signal, and also when you're talking," said Hansen. "So this study mimics simply listening to a muted voice for 50 minutes. That's not normal cell phone use, unless you have a very talkative friend and you have laryngitis."

Bottom line: We will continue to monitor the research on cell-phone safety. In the meantime, if you're concerned about radiation, you can minimize exposure by using a speakerphone or hands-free headset, holding the phone away from the head and body (especially when a call is connecting), and reducing use, especially by children.