It's hammer time: How we test door locks 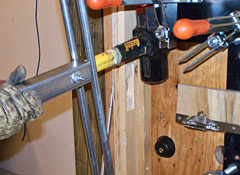 Some of the testers in our labs have been looking downright menacing lately. Using hammers, drills, pipe wrenches and other tools, they are attacking a series of door locks that we're testing for an upcoming report. After all, when you're buying a lockset, the last thing you want is one that someone can smash off with a few swings of a hammer—or get past completely with a good kick to the door.

Hammering out a lock (see photo) can be an effective way to gain entry in a secluded area where no one is likely to hear the noise. For our test, we hammer vertically on a cylinder using a modified sledgehammer that weighs about 29 pounds. Each lock gets 10 hits. Under such punishment, two locks broke off altogether. Others took the 10 blows but afterward allowed us access with a screwdriver.

Among other tests, we assess kick-in performance using a metal pendulum of about 100 pounds. We lift it to a pre-determined height, then release it repeatedly against a 1 ¾-in. door secured by 2 x 4 studding. The pendulum hits a polystyrene-foam cushion that distributes the impact in the same way the sole of a sneaker or shoe might.

We also try to get past the locks using a cordless drill, pipe wrench, water-pump pliers (channel locks), a reciprocating saw, a crowbar, picking tools (wielded by a local locksmith), and even salt spray. True, no burglar has the time to wait for a lock to corrode in the sea air. That test is for durability of the finish, which protects the lock in the long run.

The door lock tests will be included in a package of stories that will be online and on newsstands in early May. (It's the June issue of Consumer Reports magazine.) Also included will be home, auto, and online security.