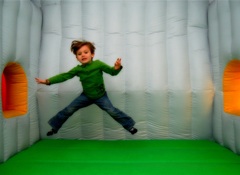 Two children were injured when the wind lifted a bouncy castle into the air and across three lanes of traffic in Arizona last weekend. Because of the growing popularity of inflatable rides and jumping rooms, these types of injuries could also become more frequent.

Popular at carnivals and kids' birthday parties, inflatable amusements come in all shapes and sizes. Kids can pile on top of other kids, which can cause broken bones and other injuries. And if the structure deflates unexpectedly, it can trap children inside.

In the Arizona incident, a young boy and girl were inside the bouncy castle when it became airborne. They were taken to the hospital with serious but not fatal injuries, according to a report by CNN. Although accidents are on the rise, inflatables are subject to few safety regulations. It's up to states or local municipalities to regulate them, but few have.

In 2007, the Consumer Product Safety Commission issued one of its first recalls of inflatable amusement ride devices in several years. Some 2,600 bounce houses made by Sportcraft were recalled because fans were breaking apart, causing the inflatables to lose air. According to the CPSC, in 2004—the most recent year for which we found complete data—inflatable rides (including slides and bouncers) accounted for about 4,900 emergency room visits. Before letting your child use an inflatable, check with the operator to see if it is properly anchored and that users are supervised.

Here are some safety tips if you plan to setup an inflatable fun house in the backyard:

For more information on this subject you can visit the Amusement Rides Committee standards for safe practices within the inflatables industry, as well as a list of amusement ride accident reports and related news at RideAccidents.com.

Also check out our previous coverage of other injury-causing accidents associated with inflatable slides and bouncy castles.