What's this I hear about a plan to privatize Medicare? 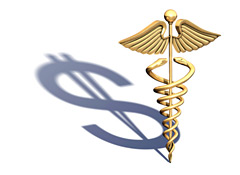 Q. Republicans in the House of Representatives just voted for a plan to cut Medicare to help reduce the budget deficit. What exactly do they have in mind?

A. The Republican plan, conceived by Rep. Paul Ryan (R-WI), chairman of the House Budget Committee and passed last week by the House on a party-line vote, would eliminate the government-run Medicare program that's been around since 1965 and replace it with private insurance that would push more costs onto Medicare recipients. It would also increase the Medicare eligibility age by two months a year starting in 2022 so that by 2033 it would be 67 instead of the current 65.

The plan isn't law yet and won't be unless the Senate also passes it—unlikely, given that President Obama and the Democrats who control the Senate say they're opposed to it.

When fully phased in, in 2022, the Ryan plan would give people on Medicare a voucher that they could use to buy private health insurance on a special exchange similar to the exchanges to be set up for working-age adults under the Affordable Care Act. The size of the voucher would vary according to the person's health, age, and income. Plans couldn't turn people down on the basis of pre-existing conditions.

The problem, according to an analysis by the nonpartisan and authoritative Congressional Budget Office, is that the Ryan plan would be more expensive overall than traditional Medicare, and individuals would have to bear almost all of that extra cost themselves. The nonpartisan, nonprofit Kaiser Family Foundation (no relation to the HMO) estimates that in 2022 the average 65-year-old Medicare recipient would be personally paying $12,500 of the typical plan's total cost of $20,500. Out-of-pocket costs would be even higher in the years beyond, because the Ryan plan is set up so the value of the vouchers won't increase as fast as the price of health care.

The Ryan plan says that people who make it to age 65 before 2022 can still get traditional Medicare and keep it as long as they want. But their benefits would decline, mainly because the Ryan plan would repeal most of the Affordable Care Act, including the part that eliminates the notorious Part D "doughnut hole." Younger people would have no Medicare option other than a voucher and private plan.

And, of course, the 32 million uninsured Americans under 65 who were expected to get coverage under health reform would continue to go without it if it were repealed.

So, would the plan help reduce the deficit? Yes. According to the CBO analysis, if the Ryan plan were to be adopted, by 2030 the government would be spending only about 6 percent of our nation's Gross National Product on health programs, including Medicare and Medicaid. If the current system stays in place, government spending on health would total between 8.75 and 9.75 percent of GNP in 2030, the CBO said.

But overall health spending, both public and private, would be higher—and more of it would come out of your pocket.

Got another question for me? Ask it here.