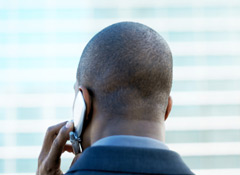 The World Health Organization's International Agency for Research on Cancer yesterday classified low-level radiation from cell phones "possibly carcinogenic to humans" based on limited evidence linking cell-phone use with an increased risk of glioma, a type of brain cancer. While that's certain to raise the level of discussion about the health effects of cell phones, government regulators remain reassuring about the potential risks.

Jonathan Samet, M.D., chairman of the IARC's Working Group and chairman of the Department of Preventive Medicine at the University of Southern California, was quoted in the announcement as saying that "the evidence, while still accumulating, is strong enough" to support the new classification. He said that "there could be some risk, and therefore we need to keep a close watch for a link between cell phones and cancer risk." The report cited a study of past cell phone use that showed a 40 percent increased risk for gliomas in the highest category of heavy users, defined as 30 minutes per day, on average, over a 10‐year period.

A spokeswoman for the Food and Drug Administration said in an e-mail that the "existing weight of scientific evidence does not show an association" between exposure to non-thermal radiofrequency energy similar to that emitted from cell phones and adverse health outcomes. She said some medical research has suggested such associations, but the findings have not been replicated and confirmed.

"Importantly, during the period of enormous increase in cell phone utilization in the United States, the incidence of brain cancer in the United States did not increase, but actually declined according to highly reliable data from the National Cancer Institute's Surveillance Epidemiology and End Results Program (SEER), arguably the best source of cancer incidence data in the U.S.," according to the FDA.

A spokesman for the Federal Communications Commission said in an e-mail that the FCC is still reviewing the IARC materials. "The FCC currently requires cell phones to meet safety standards based on the advice of federal health and safety agencies," he said. "We support the IARC recommendation for more research to clearly identify any potential health risks and, as appropriate, consider whether further actions may be required."

In a statement released yesterday, John Walls, vice president of public affairs for CTIA The Wireless Association, said that the IARC classification "does not mean cell phones cause cancer."

The IARC Working Group considered hundreds of scientific articles, which will be published in a monograph. However, a summary of the main conclusions will be published in the July 1, 2011 issue of journal Lancet Oncology, and should also be released online in a few days.

Bottom line: The IARC action is based on limited evidence and doesn't convincingly link typical cell-phone use with cancer. But it does increase the need for further study, as well as better and more visible guidance to consumers on the issue.

We will continue to monitor the research on cell-phone safety. In the meantime, if you're concerned about radiation, you can minimize exposure by using a speakerphone or hands-free headset, holding the phone away from the head and body (especially when a call is connecting), and reducing use, especially by children. Of course, you can also text.