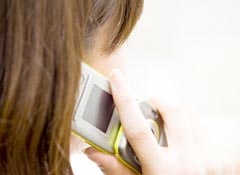 A group of scientists at the World Health Organization's International Agency for Research on Cancer, which last month classified low-level radiation from cell phones as "possibly carcinogenic to humans," provided more details yesterday about how they arrived at their conclusions in a report published online in The Lancet Oncology.

The panel of 30 scientists from 14 countries reviewed hundreds of articles, including animal research and human studies, some of which had methodological limitations or provided inconsistent results. The new report cites some key studies, including the 2010 INTERPHONE study, the largest investigation so far of cell phone use and brain tumors.

The findings also suggested an increased risk for tumors on the side of the head where the phone was held, and in the brain's temporal lobe, where exposure to cell phone radiation is highest.

In their new article, the scientists also cited Swedish research published in 2011, that showed an increased risk for glioma with the use of cell phones for more than 10 years. The risk was highest in subjects who first used cell phones before age 20.

Although the INTERPHONE and Swedish studies are susceptible to bias—due to selection of subjects and errors in recall about cell phone use—the scientists said they could not dismiss the findings. They concluded that a "causal interpretation" between exposure to cell phone radiation and glioma is possible.

The new report also noted that those studies drew a "similar" conclusion for acoustic neuroma, a non-cancerous tumor, although the case numbers were substantially smaller than for glioma. Moreover, a study from Japan has found some evidence of an increased risk for acoustic neuroma associated with the same side of the head as cell phone use.

Bottom line: The IARC action is based on limited evidence and doesn't convincingly link typical cell-phone use with cancer. But it does increase the need for further study, as well as better and more visible guidance to consumers on the issue.

We will continue to monitor the research on cell-phone safety. In the meantime, if you're concerned about radiation, you can minimize exposure by using a speakerphone or hands-free headset, holding the phone away from the head and body (especially when a call is connecting), and reducing use, especially by children. Of course, you can also text.