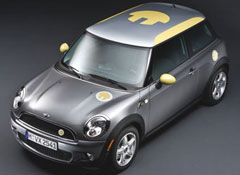 The biggest hurdle to electric cars right now may have less to do with limited range and more to do with limited understanding, according to a new study. BMW teamed up with the University of California, Davis, to survey some of the 450 early adopters who paid $850 a month to lease a Mini-E and asked them about their experiences with range anxiety, charging, weather, and other factors. Some of the findings were significant (pdf).

Pioneer range anxiety
First, there's the issue of range anxiety. Paul Eng, an Electronics editor here at Consumer Reports, was one of the Mini-E "pioneers" in New York. He was not asked to take the UC Davis survey, but like most survey respondents, he found that range anxiety was no longer a problem once he got used to the car's capabilities. In line with national surveys, more than 70 percent of Mini-E drivers drove the car less than 40 miles a day. Fully 95 percent of them drove less than 80 miles a day, well within the car's theoretical 100-mile range - as long as the weather was good. Expressing a common sentiment, one driver said: "I expected to be able to use the Mini-E for 70 percent of my driving, but I have actually used it for 97 percent of my driving. 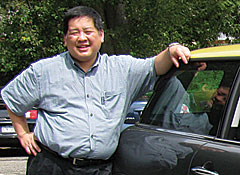 Fair-weather cars
As we've found in our own testing, electric vehicles are mainly fair-weather cars. "The greatest challenge to the energy storage of the Mini-E was cold weather," the report states. The Mini-E was available in two main regions, Southern California and metropolitan New York. Few of the cars in Southern California experienced range problems, but many of those in the New York area -- including Paul's -- did. "Drivers complained of severe drops in performance of the battery, inability to keep the cabin warm, [and] loss of the defrost function..." the report says. The limitations in cold weather were considered "not acceptable" by 56 percent of those drivers.

Learning to drive an EV
To adapt to the electric car's range limitations, many drivers adjusted their driving style. For instance, they would slow down, or to try to maximize regenerative braking to recoup energy lost after climbing hills. The Mini-E's programming was designed to maximize regenerative braking. Aas soon as drivers lifted their foot off the accelerator, it felt like the car shifted into low gear, often eliminating the need to use the brake pedal. All of the Mini-E drivers learned to like driving with one pedal, and most reported seldom needing to step on the brake pedal, unless a full stop was called for.

Navigation, please
Another way almost all the drivers tried to maximize their range was by planning out trips using online or paper maps. Some drivers reported finding new stores that were closer to the routes they commonly used. One of the most common requests at the end of the experiment was for navigation systems in future electric cars to help drivers find the shortest and most efficient routes. The Nissan Leaf comes standard with a navigation system. The 2011 Chevrolet Volt did, but it has been replaced with OnStar turn-by-turn directions in the less-expensive 2012 model. (On the other hand, with its gasoline engine backup, the Volt isn't limited by range.)

Home is where the charger is
Since all Mini-E drivers were provided with free charging stations, the cars were mainly charged at night at home. The drivers took different approaches to charging, some "filling up" the car every night. Others, with shorter daily drives, topped off only every few days as needed.

Where public chargers should be located
In the end, the survey researchers asked drivers about locations they would like to have been able to drive their Mini-Es but couldn't. Most were locations visited monthly, or less. They included places like "Grandma's house," or recreational destinations. The report breaks out the destinations for the Mini-E drivers located in Los Angeles, with the most common destinations being cities like San Diego, Palm Springs, and Santa Barbara. Placing these destinations on a map creates hot zones that clearly indicate where public "fast-chargers" could be most useful along certain highways. 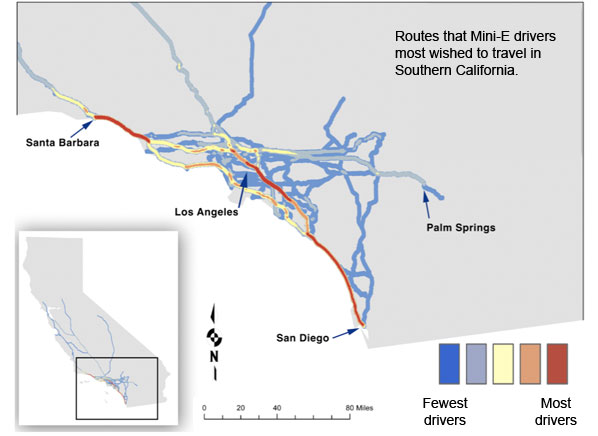 Bottom line
One factor that was not well addressed in the report was the impact of these early adopters, who paid $850 a month to lease a Mini-E, being well-enough off to afford a second car. In fact, having a backup vehicle was a condition of being chosen as a Mini-E "pioneer" and the high lease rate ensured a certain level of affluence. All but 6 percent of survey respondents said they relied on their second car to overcome limitations with the electric Mini. Many of those, however, said that limited cargo room, and no back seats, which were filled with the giant battery pack, were bigger limitations than the Mini-E's range.

In the end, that may be another way the Mini-E experiment may accurately reflect the reality of electric car ownership. The right vehicle, with decent range and interior versatility could serve most transportation needs for many motorists. For now most electric cars are likely to be second or third cars in a household.

But a key finding is that electric cars can be the primary car, rather than the secondary car.

To learn more about electric cars and other alternative technologies, see our guide to alternative fuels.