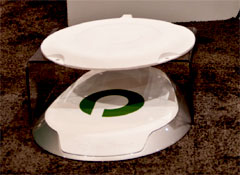 Hidden in plain sight at the Plug-In 2011 Conference & Exhibition in Raleigh, N.C., last week was a cable-free charging system called Plugless Power. It's an inductive (wireless) charger similar in theme to those that charge an electric toothbrush or smart phone.

Produced by Evatran, Plugless Power is a gadget that would reside in your home's garage floor. It recognizes your electric vehicle (EV) as it approaches and provides parking guidance. Once the car is over the parking pad, the system communicates with the EV the same way it does with corded systems, and it automatically starts charging by means of electromagnetic induction. An indicator panel communicates charging status. When fully charged, the system turns itself off. If you need to leave before charging is complete, simply move the car from the unit and the charging stops. It's designed to supply Level 2 charging (240 volt). 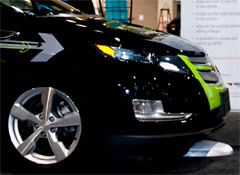 Wireless charging has appeal. As we've discovered in our experience of plugging in the Chevrolet Volt and Nissan Leaf, the cord tends to drag on the ground and get dirty, plugging and unplugging is an extra step upon arrival and departure, and once or twice someone managed to trip over the cord. A Plugless Power unit would eliminate those inconveniences.

To rig a car for inductive charging, Evatran supplies an adaptor weighing less than 10 pounds. The charging device itself probably needs professional installation and is covered by a weatherproof mat.

The system will be offered initially to fleets operating Volts, such as municipalities and utility companies. It will go on sale to the public in July 2012 for about $2,500.

We think Plugless Power and similar proposed products might broaden the appeal of EVs and plug-in hybrids by making the charging process easier. However, that is not to say inductive charging is a no-brainer. Some argue that power transfer using induction is typically slower than using a direct-wired connection. How Evatran is addressing that remains to be seen, but the promise shown at the Plug-In Conference has us intrigued.