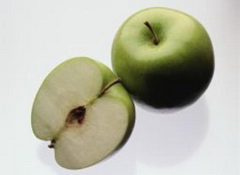 Arsenic has long been recognized as a contaminant in drinking water, but now concerns are growing about worrisome levels of arsenic appearing in food, particularly apple juice. Several tests conducted by researchers at a university and at other labs have detected arsenic levels in various brands of apple juice that were from three to five times higher than the federal limit for this carcinogen in drinking water.

Researchers at the University of Arizona in 2009 found the toxin in apple juice at levels up to nearly triple the drinking water limit of 10 parts per billion (ppb), set by the U.S. Environmental Protection Agency. Similar levels were detected in two other sets of juice testing results reported in 2010 by the nonprofit environmental group Coming Alongside and by The St. Petersburg Times.

And an even higher level of 55 ppb was found this summer in an apple juice sample sent to a lab for testing by Empire State Consumer Project, a grassroots consumer group based in Rochester, N.Y., which has urged the U.S. Food and Drug Administration to set tolerance levels for heavy metals in apple products and to enhance the testing of imported food.

"These are very high levels and that's quite concerning, especially for children who are likely to drink a fair amount of juice each day," says Robert Wright, M.D., an associate professor of pediatrics at Harvard Medical School who specializes in research on the effect of heavy metals' exposure on children. Wright says chronic exposure to even relatively low levels of arsenic can damage children's brain development, in much the same way lead does, as we've described previously in Consumer Reports.

In a recent report on its web site, the FDA says that while small amounts of arsenic can be found in some food and beverages, including apple juice, it has confidence in the safety of apple juice and continues to monitor it. Consumer Reports' scientists are studying this issue and will be evaluating the FDA's rationale.

Adults who may be exposed to arsenic through diet or drinking water also face a broad range of potential health problems that may not appear until years later. They range from increased risk of Type 2 diabetes and cardiovascular disease to skin, lung, bladder, liver, kidney and prostate cancers.

"Arsenic is quite unusual among food and water contaminants because both human health effects and the effects we see in animal and cell culture studies occur from exposure at levels that are close to or even below the current U.S. drinking water standard," says Joshua Hamilton, PhD, a toxicologist and the chief academic and scientific officer at Marine Biological Laboratory who specializes in research on how arsenic and other toxic metals increase human disease risk.

The harm caused by ingesting arsenic from water, juice or other foods depends on how much and what type of arsenic is consumed. Inorganic arsenic is generally considered the most toxic form and researchers at the University of Arizona found that inorganic was the predominant form of arsenic in the apple juices they tested. Arsenic (all kinds) also was one of the contaminants Consumer Reports found when we tested 15 protein drinks. All had at least one sample containing one or more of the following contaminants: arsenic, cadmium, lead and mercury.There is no standard for arsenic in either protein drinks or juices.

Arsenic occurs naturally in rocks and soil and can contaminate groundwater in some areas, such as states in the Southwest and New England, as well as regions of South America, India, Pakistan, and China. But arsenic poses a particular problem for apple juice because weed-killers, fungicides, and insecticides containing arsenic have been widely used for years in orchards, as well as in vineyards and cotton fields.

Though use of lead arsenate insecticides was banned in the U.S. in the late 1980s, arsenic does not degrade, so it still remains in the soil. "We are finding problems with some Washington state apples, not because of irresponsible farming practices now, but because lead arsenate pesticides that were used here decades ago are still in the soil. Heavy metals like lead and arsenic just don't go away," says Denise Wilson, PhD, an associate professor at the University of Washington who also has tested a variety of apple juices and found levels higher than drinking water standards even in brands labeled organic.

While arsenic-tainted soil in U.S. orchards is a likely source of contamination for apples grown here, the risk equation also has been changed by a major shift that has occurred over the past decade in how juice sold in America is produced. To make apple juice, manufacturers often blend water with apple juice concentrate obtained from multiple sources, and over the last decade, the concentrate they use increasingly comes from apples that are grown and processed in China.

Chinese concentrate is cheap thanks to low labor costs and Chinese government policies that provided producers with tax breaks, preferential bank loans and other assistance to boost the growth of their export business. But concerns have been raised about its safety. In a recent report on dangers posed by the boom in Chinese food imports, Food & Water Watch, a Washington, D.C.-based nonprofit group, noted that between 2000 and 2007, there was a 25 percent increase in China's use of fertilizer and pesticides, with many farmers using low-cost or counterfeit agrochemicals and banned pesticides selling for as little as one-third the price of legal ones.

"Lead arsenate is probably still being used illegally there, and was used widely I think even after 2000," says Charles Benbrook, PhD, who worked for more than 20 years in Washington, D.C., on agricultural policy issues including pesticide regulation and now serves as chief scientist at The Organic Center, a research institute. China also is the world's largest producer of arsenic and arsenic compounds, according to a 2008 report from the U.S. Geological Survey.

Food & Water Watch has urged the FDA to enhance its testing of apple products. According to a 2009 report from the U.S. Department of Agriculture's Economic Research Service, the agency is hard pressed to keep up with the surge of food imports from China. The report notes that the proportion of food shipments from China inspected by the FDA has fallen from 8 percent in 1992 to 1 percent in recent years.

FDA regulations state that the labeling must include statements of country of origin in a way that is "conspicuous." But when we checked bottles on the shelves at grocery stores in the New York City area, we found that several juice bottles disclosed the foreign sources of concentrate for their juice in print that was hard to spot or read.

As part of our continuing series of stories about contamination of food and consumer products with lead, cadmium and other heavy metals, we are currently investigating the risks posed by dietary exposures to arsenic and will be bringing you more information soon on this problem. and what you can do to reduce your risks of exposure.