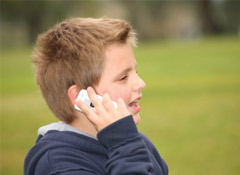 The Federal Communications Commission's "safe exposure" limits for low-level radiation absorbed from cell phones operating at their highest possible power level—known as the Specific Absorption Rate (SAR)—"does not adequately protect" most people who use cell phones, especially children who absorb more cell phone radiation than adults, according to an article published online this week in the journal, Electromagnetic Biology and Medicine.

The main problem, they wrote, is that such testing has involved cell-phone radiation readings using mannequin heads based on the upper end of U.S. military recruits--the size of a 6-foot 2-inch, 220 pound man--and filled with liquid, which has the average electrical conductivity of the brain. The test head, dubbed SAM (for Specific Anthropomorphic Mannequin), is larger than the head of 97 percent of the U.S. population, the researchers report. Typical cell phone users are smaller adults and children, who absorb relatively more cell phone radiation than SAM estimates.

Moreover, the authors noted that SAM's uniformly consistent liquid-filled head can't simulate the varied capacity of the 40 different types of brain tissue to absorb cell phone radiation. Nor does it shed light on how a child's head—which is smaller and has a thinner skull than SAM—absorbs radiation, though that can be more than two times greater than in adults, they reported. In addition, cell phones are tested in ways that underestimate exposure—such as keeping them about 1 inch (or 25 mm) away from the body during calls—rather than ways people commonly operate them, including keeping them in their trouser or shirt pockets during use, or held directly next to the head.

A far more accurate way to calculate SAR values using computer simulations based on MRI or CT scans of large and small head sizes, which allows inclusion of more than 40 brain tissue types with differing electrical properties, is available—but is currently not in use, the researchers reported.

Bottom line: Despite the many questions this article raises about SAR values and whether they adequately protect cell phone users from the potential effects of cell phone radiation, the Food and Drug Administration, which shares regulatory responsibilities for cell phones with the FCC, maintains that the "weight of scientific evidence" has not linked cell phones with harm except through heating tissue.

However, the World Health Organization's International Agency for Research on Cancer (IARC) recently classified cell-phone radiation as "possibly carcinogenic to humans." The IARC action is based on limited evidence and doesn't convincingly link typical cell-phone use with cancer. But it does increase the need for further study, as well as better and more visible guidance to consumers on the issue. (We contacted the FCC for this article but did not hear back by the time of publication.)

Given the uncertainty about the SAR values, a number of countries, such as Israel, Finland, France, and the UK have recommended limiting their use by children. We will continue to monitor the research on cell-phone safety. In the meantime, if you're concerned about radiation, you can minimize exposure by using a speakerphone, a hands-free or wired headset, holding the phone away from the head and body (especially when a call is connecting), and reducing use, especially by children. Of course, you can also text.

See our earlier articles on possible cell-phone radiation risk and on research suggesting that cell phones might alter brain function.

UPDATE: We received an e-mail from an FCC official who, commenting on the article in Electromagnetic Biology and Medicine, said the Commission "currently requires cell phones to meet safety standards based on the advice of federal health and safety agencies." He said the FCC "will continue to work with them and others to evaluate the merits of reports such as this one."