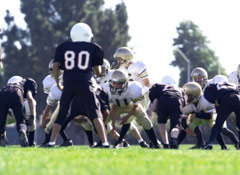 Emergency room visits for sports- and recreation-related traumatic brain injuries, including concussions, among children and adolescents increased by 60 percent since 2001, according to a new report by the Centers for Disease Control and Prevention.

The number of emergency room visits varied by age and gender:

"We believe that one reason for the increase in emergency department visits among children and adolescents may be a result of the growing awareness among parents and coaches, and the public as a whole, about the need for individuals with a suspected traumatic brain injury to be seen by a health care professional," said Linda Degutis Dr. P.H., director of the CDC's National Center for Injury Prevention and Control.

Research indicates that young athletes with a traumatic brain injury experience longer recovery times and are at greater risk of serious outcomes compared to adults. Symptoms may appear mild, but the injury can lead to significant life-long impairment affecting an individual's memory, behavior, learning, as well as emotions.

"While some research shows a child's developing brain can be resilient, it is also known to be more vulnerable to the chemical changes that occur following a traumatic brain injury," said Richard Hunt M.D., director of the CDC's Division for Injury Response.

Previously:
Concussions in young athletes: Don't rush to get back in the game
Sports and head injuries-when is it serious?
First down (and out cold); Football helmets fail to protect against concussions