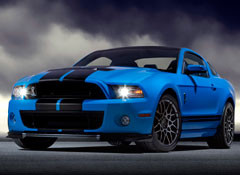 The horsepower wars rage on in Los Angeles, where two rivals will launch their latest muscle cars. Chevrolet is rolling out the production 2012 Camaro ZL1 with 580 horsepower. Ford is going a step further, announcing its 2013 Mustang Shelby GT500 will churn out 650 horsepower and achieve a top speed in excess of 200 mph.

The heart of this Blue Oval beast is a 5.8-liter V8 engine, fitted with a 2.3-liter supercharger. The resultant output is 650 horsepower and 600 lb.-ft. of torque, which Ford claims makes it the most powerful production V8 in the world. And yet through this continued powertrain enhancement, the GT500 manages to avoid a gas-guzzler tax.

To put the power to the tarmac, the GT500 uses a launch control system that allows the driver to set the desired launch rpm based on tire temperature, street surface, and other factors. This system ties in with the engine and traction controls to help this mighty Mustang take off like a scalded thoroughbred, while limiting time-wasting tire spin. (Beyond performance, this is an ownership concern, since replacing 19- and 20-inch Goodyear Eagle F1 SuperCar G: 2 isn't cheap.)

The aerodynamics have been massaged for 2013 to aid the cooling system, increase downforce, and reduce drag. Although it may not aid a typical commute, Ford says the aero load is 33-percent more effective at 160 mph than the 2011 model.

Whoa-power has been increased with a new Brembo brake system, with larger discs and more-aggressive brake pads.

The chassis has been tuned to address the other changes, though the ultimate set up comes by way of an optional Performance Package. This desirable extra brings electronic adjustable dampers that can be put in Sport mode when extra performance is desired. A Track Package can further prepare the car for high-speed, track hijinks, with an engine, rear differential, and transmission coolers.

Clearly, the Shelby GT500 is much more Mustang than most drivers need. (In part that is because the Mustang V6 and Mustang GT are so entertaining.) But, it is certainly the stuff that automotive fantasies are made of. 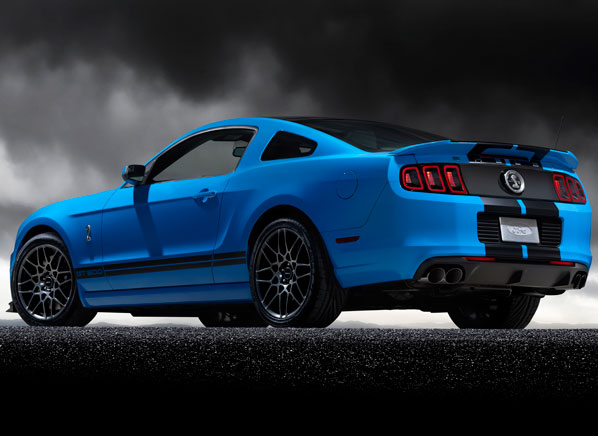