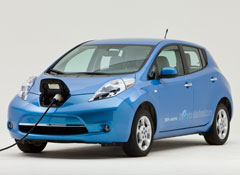 I drove our all-electric Nissan Leaf over the weekend and while I was happy to drive past gas stations, it still came at a price.

My turn in the Leaf started last Thursday night, and I had an easy commute from our Yonkers headquarters to my New Jersey home. The car was warm from the sun and only used 25 miles of charge. On the way back in Friday morning, I was concerned the Leaf would drop battery power quickly on my regular 33-mile highway commute over the Tappan Zee Bridge, so I opted to travel fewer miles and pay the $12 toll over the George Washington Bridge and another $2.25 over the Henry Hudson Bridge. Luckily traffic was light, but so was my wallet.

Driving over the weekend was great in the Leaf as I was running errands and only going short distances. The car was relatively fun to drive and the kids enjoyed the quiet ride, as well. I charged up during the afternoon for five hours on my garage standard plug, but the charge only brought the range up 25 miles to 75 miles. Consequently, I wasn't confident we would make it there and back to our dinner location, which was 60 miles round trip. My husband noted that the possible cost of a tow truck added to the cost of dinner and the babysitter would make for a very expensive date.

I didn't charge the car overnight Sunday since I had 70 miles left. Plenty for my 33 mile trip back to work, or so I thought. The car was skimmed with ice Monday morning, so I had to use the defroster for a few minutes, but after that I kept the heat off even though it was 39 degrees out.

I decided to head out on my regular long commute, with the cheaper toll, but saw the Leaf quickly run though the charge and drop to 39 miles about halfway through my trip and I was freezing. I was very happy to see stopped traffic on the New York State Thruway (that's a first) as that calmed my range anxiety and I saw the estimated range actually increase by six miles. The last two miles of my trip, I put on the heat with 24 miles left, but it did little to warm my already numb fingers and toes. I made it to the office with 17 miles to spare.

This electric experiment definitely forces you to think about your driving and always leave at least a 20-mile cushion. Heat is a luxury only allowed when driving short distances close to home. Likewise, fast highway driving may get you to your destination quicker, but it also quickly reduces charge. It seems Leaf ownership is best if you are not in a hurry or live in a climate where the temperature remains moderate, so you can avoid using the climate control for heat or air conditioning.

I have long had a fond view of future of electric cars and how it would be great to have quick-charging stations at the grocery store while I was shopping, on the street parking meter while I was out for dinner, or at the movie theater or mall. I assume this will happen in the years to come, but until then I'll need to remember to wear my boots and gloves.

Update 11/22/11: Since I originally posted this post, sharing an anecdotal account of my time in the electric car, there has been much reader feedback and even media coverage. This update is to clarify the post and direct readers to our further coverage of the Leaf.

To be clear: The feedback presented here was my experience, not the official findings based on Consumer Reports stringent testing. Clearly, the experience that owners may have with a home charger and a lifestyle well-suited to EV ownership would be different. Unlike owners, I don't have a fast 240-volt charger at home (only the one at the office).

EV ownership has many positives, but clearly it is not for everyone. The inherent limitations in today's EVs requires a different style of driving, a different way of thinking and careful planning for each trip. I am not alone in my point of view, my colleagues Jon Linkov and Gabe Shenhar came to similar conclusions, as shared in previous posts.

In Consumer Reports testing, we evaluated the Leaf through three seasons (winter, spring, and summer) to provide details of performance in a variety of conditions—both on the track and in the real-world - through 50 individual tests. The Leaf did score well, but our tests look at driving performance including acceleration, braking, fuel economy, transmission and handling ,as well as comfort, cargo space, visibility, and access. We perform these tests on all vehicles we purchase. (See a video on how we test). Based on those criteria, the Leaf is a solid car.

However, the Leaf has some flaws, including limited range and long charging times and the high-pitched noise at highway speeds that irritated some testers, but we note that it is best used as a commuter car or urban runabout. It is also important to note that the Leaf is the first mass-produced electric car available for consumers to buy. More are set to hit the market with shorter charge times and improved battery technology. The Leaf is good, and EVs promise to improve significantly in the years ahead.