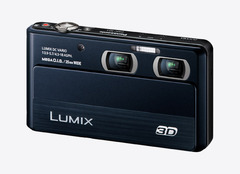 Panasonic today announced the 12-megapixel Lumix 3D1 ($500), a basic camera that can shoot 3D video and still photos as well as 2D. Like Fujifilm's 3D cameras, the Lumix 3D1 includes two lenses and two sensors, as opposed to cameras that simulate a 3D effect with one lens and sensor.

Both lenses are folded, 4x optical zoom lenses, which keeps the camera body compact. The camera also includes a very wide-angle capability (25mm). The Lumix 3D1 can capture 12-MP still photos; for 3D photos, the resolution drops to 8 MP. For video, the top resolution output for both 2D and 3D is 1920x1080 (30p for 2D and 60i for 3D). The Lumix 3D1 also includes a 3.5-inch touch-screen LCD (which does not display 3D images or video).

The company also announced an advanced SLR-like model, the 16-MP Lumix DMC-GX1 ($800 with the 14-42mm kit zoom lens, $700 for body only).
This is Panasonic's latest G-series camera and features a top high-sensitivity setting of ISO 12800.

The Lumix DMC-GX1 has a 3-inch touch-screen LCD (allowing for tap-to-focus and tap-to-shoot capability) and can capture top-resolution HD video at 1080p (30p output). The camera also has an internal level gauge to detect horizon lines and is compatible with Panasonic's new power zoom lenses, which includes a power-zoom switch on the lens barrel. And like all new G-series Lumix models, it's compatible with Panasonic's 3D accessory lens. Unlike some cameras in this series, though, it does not come with a built-in electronic viewfinder on the camera body.

Both cameras will be available in December. 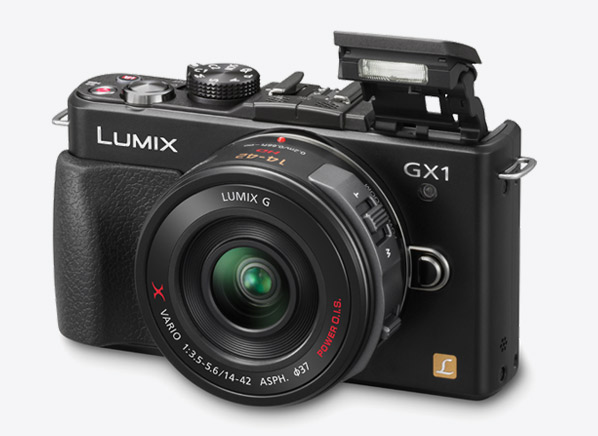