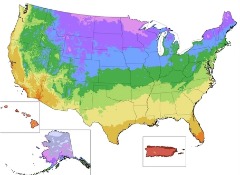 At this time of year, most gardening activity is of the armchair variety. With the arrival of seed catalogs, it's a good time to start planning what you'll be planting in the Spring. But before you order any flowers or vegetables, consult the newly updated Plant Hardiness Zone Map because your zone may be warmer than you think. Compared to the 1990 map, the last time it was updated, zone boundaries have shifted by about 5 degrees F throughout much of the nation, according to the U.S. Department of Agriculture.

The new version of the color-coded map includes two new zones—zones 12 (50-60 degrees F) and 13 (60-70 degrees F). (The higher the zone number, the warmer your average low temperature during wintertime.) Each zone is a 10-degree Fahrenheit band, further divided into A and B 5-degree Fahrenheit zones. The new map is searchable by state and by zip code. "This is the most sophisticated Plant Hardiness Zone Map yet for the United States," said Dr. Catherine Woteki, USDA Under Secretary for Research, Education and Economics in a press release. "The increases in accuracy and detail that this map represents will be extremely useful for gardeners and researchers."

The zone designations represent the average annual extreme minimum temperatures at a given location during a particular time period. They do not reflect the coldest it has ever been or ever will be at a specific location, but simply the average lowest winter temperature for the location over a specified time. Low temperature during the winter is a critical factor in the survival of plants at specific locations, according to the USDA.

The agency said the changes were the result of a number of factors including taking temperature data from over a 30 year period, rather than 13; taking changes in elevation and closeness to large bodies of water into account, and using data from many more weather stations.

Although the new map has provoked questions about climate change, USDA officials, were careful not to make claims about global warming. USDA spokeswoman Kim Kaplan, who was part of the map team, told the Washington Post that even though much of the country is in warmer zones, the map "is simply not a good instrument" to demonstrate climate change because it is based on just the coldest days of the year.