A generator can help you through another hurricane season 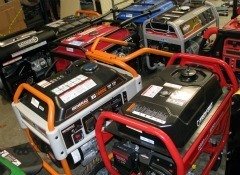 With tropical storm Beryl dumping buckets of rain on them, residents of the Southeast needed no reminder that it's National Hurricane Preparedness Week. The hurricane season doesn't officially start until Friday but we've already had two named storms. Fortunately, that doesn't mean that we're in for more rough weather than usual, says the National Oceanic and Atmospheric Administration. The agency is predicting a near-normal hurricane season.

To get ready, NOAA and other governmental agencies are offering all kinds of information on the website for National Hurricane Preparedness Week. Part of that includes ensuring that your food doesn't spoil, the pump for your well keeps working, and other essential devices continue to operate. That's where the expertise at Consumer Reports comes in.

Currently in our labs, we're completing testing on 11 portable and three whole-house generators, mostly ranging from 5,000 to 7,000 watts, from Generac, Honda, Kohler, and other manufacturers. We expect the final Ratings to post on this website in July. In the meantime, here's a little of what we've discovered:

While generators can be a lifesaver, you shouldn't use most of them for any longer than you have to. The reason? The quality of power they supply runs motors hotter and can also affect the usable life of some electronic equipment.

If you don't want another gasoline engine to maintain, propane may sound like a good alternative—especially if you can run your generator off the same 20-pound tanks you use for your gas grill. But in our experience, running a 5,000- to 7,000-watt generator off a 20-pound propane tank often resulted in frozen fittings, which shut down the generator. Larger (40-pound portable) tanks avoided this problem, but, as with gasoline, you'll need to keep lots of fuel on hand.

Want to power just a few things? For short-term power on the cheap, a power inverter running off a car battery might do. We recently tested two from PowerBright. Here are some other tips as you weigh your options. For more read our generator buying guide.

• Involve your electrician from the get-go to properly size both the generator and transfer switch to the devices you'll want to power during an outage. (Here's some background on both the process and the jargon.) Too many buyers go shopping when the power's out, randomly choose a product that looks like it's up to the task, and have no idea what to do when they get it home.

• Keep lots of fuel on hand. Depending on how widespread the power outage, you might be able to drive to a neighboring town for refills. But you can't presume that the roads will be accessible.