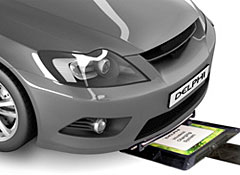 How much do you hate going to a gas station? Would plugging your car in every night be even more of a pain? Or would it become a simple routine, much like plugging in your cell phone at night? Those are some of the main questions electric car advocates are asking this week at EVS26, the 26th annual Electric Vehicle Symposium in Los Angeles. The answers, of course, depend on what you're selling.

As we discussed yesterday, electric car charging consumes much of the conversation at this year's event. Traditional electric-car advocates like to point out that in surveys, owners much prefer plugging in to going to a gas station.

Now a counterpoint is springing up. Several companies, including Delphi, Siemens. and Qualcomm, have developed inductive charging mats that allow drivers to simply pull into their garage (or another so-equipped parking place) and charge. No plugging necessary. Both the car and the parking space would have to be equipped for such wireless charging. Siemens estimates the installation cost of both parts would run about $2,000, or twice what a corded home charger would cost at that time.

Qualcomm has developed a technology that would allow the car to charge if the driver got within 8 or 9 inches of the proper position over the charging pad. That's enough leeway that as long as the car is between the lines of the parking spot, charging should take place. A dashboard light indicates if the charger isn't engaged.

Inductive charging could be a huge potential benefit for fleet customers such as car-sharing and rental car services, because drivers wouldn't have to worry about whether the previous driver had remembered to plug in. Looking further out, if such inductive chargers were embedded along popular electric-car byways, they could periodically top up the battery, giving the cars additional range. Or, perhaps more importantly, it could allow automakers to install smaller, lighter, cheaper batteries.

As for those who plug in EVs in the meantime, there may be a disconnect between those who have a home charger with a cord installed, and those who don't. In the United States, charger standards specify the cord be permanently attached to the charger. This makes it simpler than filling with gas. You just drive up, open the charge port, and plug in. On a public charger, you may have to also swipe an activation card. But in Europe, and for drivers who use the 120-volt chargers supplied with the cars, the cords have to be unwrapped before and plugged in at both ends (and then, ideally, wrapped up again after they're unplugged). In our experience, this can be an inconvenience.

How about you? Would having to plug your car in along with your cell phone every night be annoying? Or would you prefer it to trips to the gas station? Share your thoughts in the comments section below.

View and compare all Hybrids/EVs ratings.