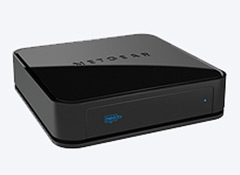 Netgear, which already sells a $50 streaming media player, has launched a newer version called the NeoTV Pro (NTV200s), priced at $70. The new Neo TV Pro is the first to use Intel's WiDi (Wireless Display) technology, which can display content from a WiDi-enabled laptop—including online videos, photos, and even sporting events like the London Olympics—on a TV.

Like other streaming media players, including Apple's revamped Apple TV, The Neo TV pro has access to shows and movies from Netflix. It can also access other services, including Hulu Plus and Vudu, as well as Pandora Internet radio.

The device has built-in Wi-Fi and supports up to 1080p video and surround sound. The NeoTV Pro comes with a conventional remote, but apps are available that can turn an iPhone, iPad, iPod Touch, or Android smart phone or tablet into a touch-screen remote control.

The NeoTV Pro Streaming Player, which is available now, joins a growing list of sub-$100 streaming media players, including Apple TV, Roku, D-Link's MovieMate, and several Sony players. VIzio is expected to join the crowd sometime next month. We're currently testing some of these boxes, so stay tuned for our upcoming report.