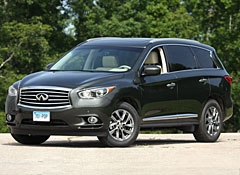 Nissan's luxury-badged 2013 Infiniti JX35 sport-utility vehicles are being recalled for a defect in the fuel gauge system, said the National Highway Traffic Safety Administration (NHTSA). The fuel gauges in more than 7,800 Infiniti SUVs may display higher levels of fuel than what's actually in the tanks, which may cause drivers to unexpectedly run out of gas.

The company has told the NHTSA that the fuel gauge problem with the Infiniti JX35 SUV is due to a fuel transfer tube inside the vehicle's fuel tank. During production of the SUV, the tube was incorrectly routed, which subsequently prevents the internal fuel level float sensor from properly measuring the amount of gas in the tank.

Last month, the federal safety agency also began a probe of the Infiniti JX35's brakes. At issue is the Driver Assistance Package, which automatically applies the SUV's brakes based on the vehicle's on-board radar sensors.

Consumer Reports recently bought an Infiniti JX35—with the Driver Assistance Package and other luxuries—for testing and inclusion in our Ratings of SUVs. (Our testers will have a complete report on the luxury Nissan SUV next month.)

According to a Reuters news story, Nissan says the fuel gauge problem with the Infiniti JX35 has been resolved with models still on dealer lots. The company will notify affected Infiniti SUV owners to bring their vehicles for a free repair next month.