With Isaac bearing down, GOP bash is least of FEMA's worries 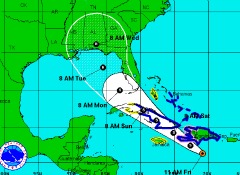 With Tropical Storm Isaac threatening to become a hurricane, organizers of next week's Republican National Convention are scrambling to make plans in case the storm disrupts the Tampa gathering. But Craig Fugate, director of the Federal Emergency Management Agency, says a bigger concern is making sure that people in the path of the storm are getting ready now.

While the exact path of the storm is not known, it's expected to make landfall as a Category 1 hurricane overnight Tuesday somewhere between New Orleans and Tallahassee, said meteorologist Al Roker on NBC's Today show. Fugate suggests that everyone in the storm's projected path have enough supplies to last 72 hours and to know when to evacuate, reported NBCNews.com. "I think the most dangerous thing is when people keep waiting to see what the next forecast is even if they're in an evacuation zone," he told the network. Here is what FEMA advises as the storm approaches.

FEMA, the National Hurricane Center and the American Red Cross are making it easier to track major storms and prepare for them by offering information on their websites and through mobile apps and social media.

If you own a generator, make sure you have enough fuel on hand to power a portable or start up your stationary unit to make sure it's in working order. At Consumer Reports, we just posted the results of our latest generator tests, and recommended 6 of the 14 including a $670 portable Generac that we named a CR Best Buy.