Briggs & Stratton tries to take the guesswork out of generators 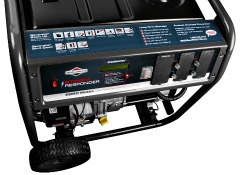 Anyone who buys a generator brings it home with the best of intentions, often timed with a major storm like the approaching Hurricane Sandy. But while a stationary ("standby") generator periodically starts itself up, checks out its readiness, and displays error codes when it needs attention, portable models seldom offer such conveniences. Briggs & Stratton hopes to change that with its 6,250-watt Storm Responder 6250, a new portable generator Consumer Reports saw at this week's annual Green Industry and Equipment Expo (GIE+Expo) in Kentucky.

Typically, a generator's owner's manual and other documentation detail the steps necessary to start the unit and shut it down. These guides also warn you where not to place it while it's running, such as in a garage (even with the door wide open) or near points of entry such as doors and windows. Still, to learn that you have to open the manual—and manufacturers know that isn't likely. So Briggs put all that information on the generator itself, in more detail than we've seen elsewhere. What's there is enough to get you through a storm should you buy the generator and rush it home during a power outage.

The intensive care goes deeper than the labeling. A so-called "Stat Station" screen displays the power being used and icons on the generator's opposite side give some examples of how much the unit can power. Indicators also gives total lifetime hours run. Press an adjacent button, and it will cycle through other messages telling you when to check or change the oil, and replace the air cleaner or spark plug. There's no low-oil shutoff feature, which shuts down the generator before engine damage occurs, but the status display should make up for it. If you still run into trouble, you can call the Briggs & Stratton "Answer Center," which the company says is always staffed during major storms. There's also a QR code on the generator's engine that you can scan with a smartphone to view an electronic version of the engine's manual, along with other information.

While it's rated at 6,250 watts for general usage, the Storm Responder offers 8,250 surge watts for the extra wattage needed when refrigerators, sump pumps, and other appliances cycle on. We hope to get it into our labs for testing once it starts shipping, but in the meantime, you'll be able to find it for $800 at Home Depot, Lowe's and Sears. Before you buy any generator, however, check out our Ratings for portable and stationary generators, along with our buying advice, which includes a how-to video.