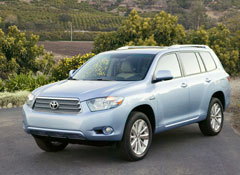 More than 7.4 million Toyota vehicles are being recalled worldwide—the largest ever since 1996—because of bad power window switches, said Toyota Motor Corp. The driver's door-mounted switches may have a "notchy" or "sticky" feel to them during operation. And if drivers use oil or other lubricants to correct the problem, the switch assembly could melt, emit smoke or even cause a fire.

Toyota says the sticky window switches are found in the following models of Toyota cars, SUVs, and pickup trucks:

Toyota says it has not received any reports of injuries or accidents due to the faulty window switches. But approximately 2.5 million Toyota vehicles in the U.S. and another 240,000 in Canada may be affected by the issue. Approximately 1.4 million vehicles each in China and Europe may also have sticky window switches, said a Toyota spokesman.

The companies expect to notify affected owners in North America later this month to bring their vehicles in to dealerships for a free inspection and, if needed, an application of special fluorine grease.

Toyota had the largest global recall of more than 10 million vehicles for unintended acceleration in 2009 and 2010.