In our labs, an upright vacuum does triple duty 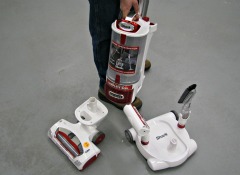 One of the first choices to make when shopping for a full-size vacuum cleaner is between an upright or canister vac. Occasionally, though, you can buy both in one package. One of the latest models to hit our Ratings, the bagless Shark Rotator Professional Lift-Away NV501, is one such model, but with a twist.

Some uprights come with an extra mini-canister, as we've seen in the Hoover Platinum Bagged UH30010COM and some older Oreck uprights. The $250 Shark, though, follows a newer trend of letting you detach the motor, bin, and hose from the power head. (See photo.) You can then either place the main component onto a wheeled caddy, shown to the right of the power head, for use as a canister or tote it around as a heavy handheld. We also saw impressive carpet cleaning, easy maneuvering, and an array of helpful tools—including an extendable edge tool. Other optional, extra-cost tools include a mini-blinds tool, an under-appliance wand, and detail kits for use on, say, a computer's keyboard or your car's dashboard.

The latest batch of vacuums to hit our Ratings are bagless, with the Shark the best-scoring of the five uprights. Among other highlights, the $300 Electrolux Precision Brushroll Clean EL8807A has a built-in comb that skims hair from the brush roll when you press a foot-controlled lever. We liked this feature and hope it spreads to other models. But the Electrolux overall was hardly a must-buy.

The seven new vacuums tested also include two canisters from Samsung, which had long been absent from the U.S. market. We tested the $350 Electric Blue VCC88P0H1B and $450 Champagne VCC96P0H1G. The latter adds a dirt sensor and more so-called "dust-separating chambers," which the manufacturer claims improves emissions and extends filter life. Both models indeed emitted little of what they sucked up. Carpet cleaning and tool airflow, however, didn't bowl us over.

You have other considerations before you buy, including bagged versus bagless. Don't miss our buying advice, which includes a video on how we test. Then see our Ratings of more than 100 models.