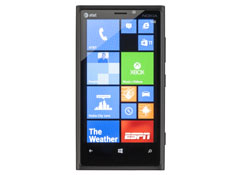 The Lumia 920 and HTC Windows Phone 8X, two of the first Windows Phone 8 models, turned in some of best performances of phones in our newest Ratings—just a few points behind top-scoring Android phones from LG and Samsung, and the Apple iPhone.

One reason is that both phones have great-looking displays, fine cameras, and other standout hardware that compares favorably with that of other top-notch models, for one reason. Another is the radically refined OS on which they run.

Though it's still playing catch-up to the older mobile OSes, Windows Phone 8 offers an appealing balance between the simplicity of iOS and the versatility of Android, conducting nearly all of its business on two easy-to-master main panels: one for storing apps and the other made up of resizable Live Tiles, which can display updates from social-network feeds and other sources. And the OS's large, colorful fonts provide a clear, distinctive presentation of e-mail, calendars, and other content.

On the downside, you'll find a fairly small selection of music, video, apps, games (including Xbox), and other content from the Windows store—nothing yet to compare with Android or Apple. Here are details on these Windows Phone models; find more in our new smart-phone Ratings.

The Nokia Lumia 920 ($100, AT&T) is brimming with advanced features, such as wireless charging based on magnetic induction and a 4.4-inch, high-definition (720p), touch-screen display that you can use even when you're wearing gloves. The display's quality is excellent, and it's quite easy to see in bright light.

The Lumia 920's 8-megapixel camera has an optical image stabilizer—one of the first available on a smart phone. That helped it take excellent photos under low-light conditions, putting its still-camera performance on a par with that of the iPhone 5 and 4S. Surprisingly, video quality was only good, a decent score but noticeably worse than what you'll get from an iPhone and some high-performing Android models from Samsung, LG, and HTC. Another downer: The phone measures 5.1 x 2.8 x 0.5 inches and weighs 6.6 ounces, making it one of the biggest and heaviest phones around.

The HTC Windows Phone 8X ( $200, AT&T and Verizon), which has a 4.3-inch, high-definition (720p) touch-screen display, lacks many of the bells and whistles of the heftier Lumia 920, but its relatively thin and lightweight case has rounded tapered edges and rubber-like surface that make the phone quite comfortable to grip. The phone's main 8-megapixel camera took very good still pictures and videos.

Some other notable new admissions in our latest Ratings include a couple Android models.

The HTC Droid DNA ($200, Verizon) has a fast quad-core 1.5-GHz Snapdragon processor and is the first phone with a true high-def-resolution 1920x1080 display, offering about 440 ppi (pixels per square inch). That makes it the first phone capable of providing a home for every pixel of a 1080p video image. No other phone, not even the iPhone 5—the reigning pixel-density champ (at 326 ppi)—can make that claim. As expected, display quality was excellent, though the overall score was hampered by ho-hum performance in other key areas.

The Google Nexus 4 ($200, T-Mobile), which is actually made by LG, has a 4.7-inch, high-definition (720p) display. Standout features include built-in wireless charging via induction and a Photo Sphere, which lets you shoot 360-degree panorama stills. But perhaps most noteworthy is what it doesn't have: the typical interface tweaks many phone makers and carriers install on top of the Android operating system, such as HTC does with its Sense interface, before the phone reaches your hands.