Metal Gear Rising: Revengeance is a new entry into the fast-paced stealth-action Metal Gear franchise that first debuted in 1987. This game is an action-packed bloodbath that hardcore action gamers and fans of the franchise will likely love—but keep the kids away.

Rising features the character Raiden, who was first introduced in Metal Gear Solid 2: Sons of Liberty. At that time he was a rookie agent on his first mission. Rising picks up after the last game in the series, Metal Gear Solid 4: Guns of the Patriots, in which Raiden became a cyborg; unlike previous games in the franchise, Rising is more action and less stealth.

The game's story is set in 2018. Raiden's private military company, Maverick Security, is hired for a job but attacked by another PMC, Desperado Enterprises. Raiden's client is killed, and he is severely injured. He is recovered by his team and given a far more sophisticated cyborg body.

Raiden then discovers that the company employing Desperado Enterprises is using children as test subjects, and he uses his new abilities to take revenge against it. Along the way, some deep ideas are explored: We learn about Raiden's past, his motivations, and his feelings about killing others to achieve his goals. Outside the main story, you can gain more insight into Raiden (as well as other characters) by "calling" them during missions.

Gameplay. Rising takes advantage of Raiden's cyborg abilities and skill with a sword. Each chapter features environments for Raiden to explore, with hidden items, upgrades and challenges to find.

Many items in the environment can be sliced into pieces, either to get ahead in the game or just for fun. These items are highlighted when you're using Raiden's AR Vision.

For more reviews, tips, and news, check out our guide to video games, consoles, and tech toys.

You can use stealth (sneaky strategies and silent killing) to get through certain areas, but it isn't as rewarding as it was in the previous games. Enemies range from cyborgs to giant robots. You can use Raiden's Ninja Run ability to navigate levels and automatically clear obstacles, and use various combinations of attacks and weapons to destroy enemies.

One of the highlights of the game is Raiden's Blade Mode, which slows time and zooms the camera into an over-the-shoulder view. In this mode, you can choose the angle and direction of sword slashes, cutting objects and enemies in whatever way you choose. And Raiden gains health and energy from cutting enemies in half and tearing out their spines. 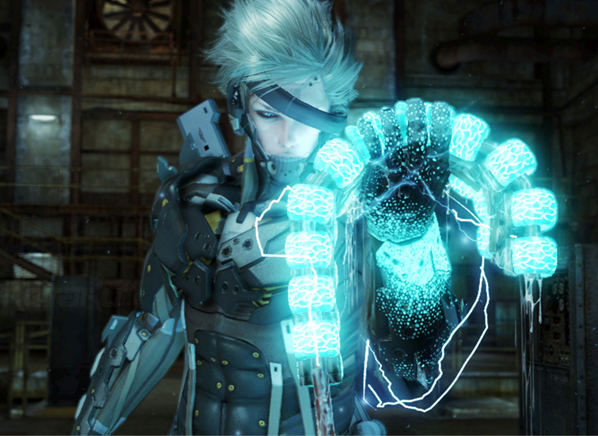 Raiden's body and weapons are upgradable with Battle Points you earn in missions. And alternative appearances and weapons can be earned by completing chapters, defeating certain enemies, and performing well in unlocked VR Missions.

At times, I found the camera to be frustratingly difficult to control, especially when I was facing multiple enemies at the same time. Some enemies were also quite difficult to beat, even when I played the game on Normal difficulty.

The game sometimes does a poor job of explaining things to the player. For example, you can lock onto enemies, which ended up being a huge help against bosses— but I had to figure that out on my own.

I recommend playing the tutorial VR Missions as soon as you can unlock them, because there are some helpful things to be learned. Another tip is to be defensive: You can deflect enemy attacks by pressing the Attack button and the joystick toward the enemy. A specific Block button would also help.

Not to give anything away, but the final boss of this game is one of the toughest I've faced in a while. It took me around 30 attempts to beat him. But it was extremely satisfying when I did.

Visuals. The impressive graphics give a great level of detail to the weird and interesting characters, such as Bladewolf, a robotic dog with AI. The game isn't going for a realistic look, which makes sense considering most of the characters are only partially human. The cyborg bodies are cool but strange, and in some cases even a little bit creepy.

Action sequences look amazing, and there are some great ones in the game. You'll have a sword fight on a train, for example, that features characters bouncing off the tunnel walls and back onto the moving train.

Replay. The game is short; I finished my first run in about 6 hours. Fortunately, you can restart the game with all the upgrades you earned in your previous game; unless you spent a lot of time scouring for hidden objects, you probably haven't found them all. Playing the optional VR Missions is challenging, and earning a top ranking in all of them will net you some additional weapons and armors.

Who's it for? This game is not for kids or the sensitive (squeamish) gamer. As noted above, you are actually encouraged to slice enemies into pieces and rip out their spines. And there's a lot of cursing.

Bottom line. Metal Gear Rising: Revengeance is a lot of fun; some areas can be extremely challenging but are very satisfying to conquer. The game is definitely geared towards adults, with mature content and a deep plot line that kids probably wouldn't be able to follow anyway.

A limited edition of the game is available for $150; it comes with a steel case for the game, the soundtrack, and a plasma lamp that features Raiden's sword. Only extreme fans of the Metal Gear series will shell out for this version.