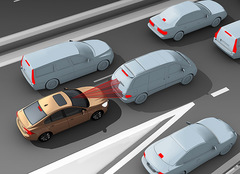 Many new cars boast technology to help drivers avoid a crash, and now a new study finds that one system is a standout in preventing fender benders and injuries on the road.

Forward-collision avoidance systems with autonomous braking are making a measurable difference in insurance claims, says the Insurance Institute for Highway Safety (IIHS). Such a system can slow down and even stop the car in the event of an imminent rear impact to avoid major damage.

IIHS looked specifically at Volvo's City Safety on the S60 and XC60. City Safety uses infrared technology to determine whether you are approaching a vehicle too quickly and it will apply the brakes accordingly to avoid or minimize a collision. It operates at speeds up to 19 mph.

To learn more about car safety, visit our guide to car safety.

Analysts looked at claim data for 2011-2012 Volvo S60 sedans and 2009-2012 Volvo XC60 SUVs and compared the results to Volvo models without City Safety. They found drivers are less likely to be in a crash with City Safety, than without.

Originally the purview of luxury models, crash avoidance systems are now trickling down to mainstream vehicles. For the 2013 model year, 29 percent of vehicles have optional forward-collision warning and 12 percent of them have autonomous braking. Forward collision warning is standard on the Acura ZDX, BMW 760i, Honda Crosstour AWD, Hyundai Equus, and Toyota Land Cruiser. A forward-collision avoidance system is standard on the Mercedes-Benz G-Class, and City Safety is standard on the Volvo S60, S80, XC60, and XC70. Subaru has an optional system that is relatively affordable, called EyeSight, for the Legacy and Outback.

The National Highway Traffic Safety Administration (NHTSA) lists which vehicles have forward-collision warning systems and other technologies on their website at safercar.gov.