Blu-ray discs: 'We're not dead yet' 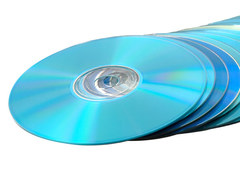 Think video streaming, from services such as Amazon and Netflix, is killing physical discs? Not quite yet, according to the Digital Entertainment Group (DEG), which reports that Blu-ray sales were 28.5 percent higher in the first quarter of this year than a year ago.

Spending on digital distribution jumped 26 percent from quarter to quarter, but when you factor out rentals, digital sell-through—via a la carte services such as Amazon Instant Video, iTunes, and Vudu—was up 51 percent, according to the group.

Though DEG didn't cite specific reasons for the Blu-ray increase, we imagine that the wider availability of titles, the release of special high-interest multiple-disc packages, and lower prices all figured prominently in the increase.

Sales of both new releases and catalog Blu-ray titles rose by 37 percent and 12 percent, respectively, compared to the the first quarter of 2012. DEG also said that 3.2 million Blu-ray players were sold in the first quarter of this year, though that number includes both Blu-ray enabled home-theater-in-a-box systems and Sony PlayStation video-game consoles.

The Blu-ray gains were largely offset by declining sales of standard DVDs, though; when DVD and Blu-ray sales are combined, the total spending on physical discs was up only 2 percent in the quarter.

Of course, the widespread available of devices that connect to the Web for streaming content—Internet TVs, streaming media players, Blu-ray players, video-game consoles, and some DVRs—is helping to fuel the digital increases. Acknowledging this shift in viewing options, Consumer Reports recently set up a streaming-media to test not just dedicated streaming media players (such as Apple TV, the new Roku 3, Boxee Cloud DVR, and WD TV Play) but complete streaming ecosystems offered by the various hardware manufacturers.

Are you still renting or buying Blu-ray movies? I watch Blu-ray movies only in my dedicated home theater (a 1080p front projector, 110-inch screen and a 7.2-channel surround-sound system) due to the higher picture quality and lossless (Dolby TrueHD and DTS-HD Master) audio formats. Let us know whether Blu-rays—or even DVDs—are part of your viewing choices, and whether you're watching fewer discs as a result of streaming services such as Amazon, Netflix, or Vudu.