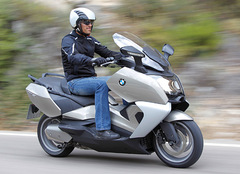 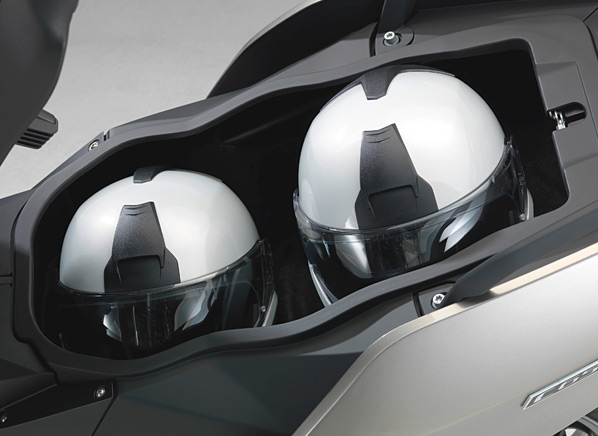 With a brand forever linked with the "ultimate driving machine" tagline, you might not associate BMW with scooters. But BMW has built scooters for years in Europe, and it has been making inroads stateside with its own take on efficient, urban transportation. We recently rode its C 600 maxi-scooter, a relatively large scooter designed for two-up highway riding, and came away impressed.

Packaging is often an advantage scooters hold over motorcycles. With its own trick, the C 600 Sport has a clever expandable storage compartment below the two-person seat that will hold two full-face helmets, as long as the bike is parked. (You have to fold in the back half of the storage well before riding, or the rear tire will rub against it.) With the extra storage flap tucked away, the under-seat compartment will hold one full-face helmet—handy for running to the train station, for example, to pick up a passenger. (Check out the new Honda Forza scooter.)

Visit our motorcycle buying guide for advice on choosing the right bike and motorcycle safety. 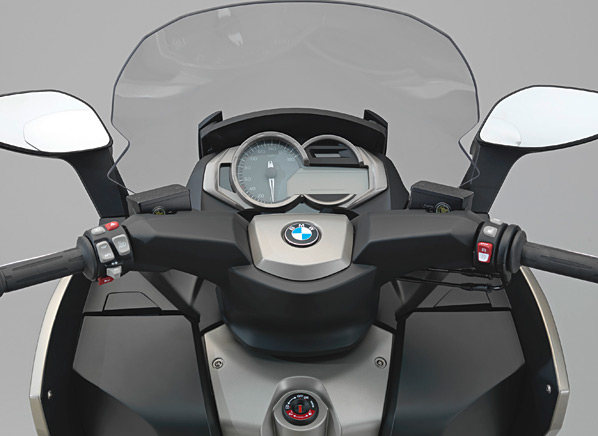 This scooter line comes in two models, the C 600 Sport that we rode and the C 650 GT, which has saddle bags, a lower seat height, higher handlebars, a power height-adjustable windshield. The GT lacks the under-seat storage expansion. Both use the same high-compression 60-hp engine, despite their divergent designations. BMW rates them at 53 mpg at a steady 56 mph. No figures are offered for urban riding. The downside here is that they require premium fuel.

The BMW C 600 Sport is powered by a 60-hp, 647cc, inline twin-cylinder engine. A continuously variable transmission and a centrifugal clutch make the C 600 Sport easy for new riders to learn. There are twin 10.6-inch disc brakes up front and a single disc to the rear. A proven, life-saving safety system, antilock brakes are standard. Top speed is rated at 109 mph; we thought better of testing that claim.

With just a slight twist of the throttle, the big bike feels torquey and eager to surge ahead. It's very docile at parking lot speeds and on the highway. However, at medium speeds, we found the engine a little lumpy and coarse.

The controls couldn't be easier. With everything right at your fingertips, you don't have to reach for anything, although we didn't play with the intimidating LCD trip computer. Handling is light and nimble for such a big scooter, making it quite an enjoyable ride. And when we say, "big," we mean it. This scoot weighs 549 pounds—over a hundred pounds more than a BMW G 650 GS motorcycle.

It's undoubtedly the most capable scooter I've ridden, and it is certainly the most comfortable on the highway. But I still found it less responsive than a traditional motorcycle.

If all this sounds like overkill for an urban runabout, I agree.

Learn about riding in our motorcycle hub, buying guide, and in our reliability and owner satisfaction report.