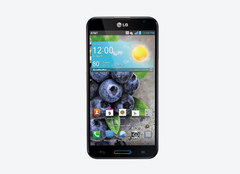 The LG Optimus G Pro, exclusively available now from AT&T for $200 with a two-year contract, is essentially a supersized version of the Optimus G, one of the highest-scoring models in our Ratings of smart phones. But with its 5.5-inch display, the G Pro also invites comparisons to the popular Samsung Galaxy Note II. The Optimus colossus lacks the Note II's stylus and the floating-preview options that come with it, but it compensates with other capabilities, including the unique ability to "zoom in" on conversations while using the phone's camcorder.

I've been using a press sample of the Optimus G Pro for several days, and I was quickly spoiled by its clever controls and large, ultra-sharp display (400 pixels per inch versus the Note II's 267 ppi). Images held up admirably on the screen, even in bright sunlight, and text appeared quite crisp. And the phone's gargantuan 3,140mAh battery provided plenty of juice to keep the phone operating for a full day at full throttle.

Measuring 5.9 x 3 x 0.4 inches, the LG Optimus Pro is slightly smaller and lighter than the Galaxy Note II, which measures 6 x 3.2 x 0.4 inches. It even weighs a hair less (6.1 ounces versus 6.3 ounces), and can be a little lighter on your wallet. The AT&T and Sprint versions of the Galaxy Note II each costs $300 with a two-year contract, $100 more than the Optimus G Pro.

Here's my take on some of the phone's more interesting features:

Audio Zoom. This is one feature found you won't find on any other phone (or camera), and it promises a compelling advantage: When you use the main camcorder's digital zoom lens to zero in on one or two subjects in a group, the camera's microphone "enlarges" the voices of those subjects while filtering out sounds made outside the frame.

In my informal tests, which involved a high-school band concert and friends conversing in both noisy and quiet environments, Audio Zoom didn't work as well as I had hoped. Subject voices and instruments sounded only slightly louder than surrounding elements, but background noise was still a problem. Nevertheless, when you're the proud father of a high-school saxophonist, you'll relish Audio Zoom's meager advantages.

Find the best model for your needs and budget: Check our phone buying guide and Ratings.

Dual Recording Mode. The Optimus G Pro can capture video (but not still images) simultaneously on the front and rear cameras, allowing you to appear, as an inset, within the video image recorded by the phone's main, rear-facing camera. The idea is to allow the shooter to be part of the video. You can easily move the inset anywhere on the phone's display, as well as resize it, though you can't change its rectangular shape.

We first saw this capability on the Samsung Galaxy S4 (called Dual-Shot), which provides more inset customization options and adds the ability to perform the same trick with its still cameras. But the feature worked well.

Remote possibilities. As with the HTC One, Samsung Galaxy S4, and other phones we've recently seen, the Optimus G Pro has an IR blaster that can be easily programmed to control HDTVs and set-top boxes. Setting this feature up via the Optimus G Pro's QRemote feature was quite easy: I just selected the type of device and its brand from the menu.

If the interface's power button succeeds in turning the device on or off, hit save. Otherwise, the control app will cycle though a comprehensive list of other codes until your device reacts. And unlike the app on the Samsung Galaxy S4, QRemote was able to control my ancient, though excellent, Panasonic DVR. There's no program guide yet, but LG says that's coming.

Other great features. The phone has all the features we love on its cousin, the Optimus G. These include Quick Memo, a pull-down menu option app that lets you use your finger to scribble notes on anything you see on the phone's screen, from photos, e-mails, and calendar appointments to the home screen itself.

The finished "memo" actually becomes a picture that you can easily e-mail or text to others, as well as share on social networks. The QSlide feature makes the calendar and videos float transparently behind other apps on the screen so that you can perform other tasks, such as send a text or browse the Web.

The camera has some intriguing features as well. For example, you can take a picture by just saying "cheese," and its Time catch feature takes a group of photos just before you press the shutter. In Wise screen mode, the front-facing camera monitors your eyes while you're reading a Web page or other document to prevent the screen from timing out. Also on board is Video Wiz, an app that can quickly turn a tossed salad of video clips, photos, and sound clips into a polished multimedia presentation.

Bottom line: While our test experts are still running the LG Optimus G Pro through its paces, my first impressions are positive. It seems like an excellent and more affordable alternative to current reigning champion of large-screen phones, the Samsung Galaxy Note II. Best of all, you can perform many of the Note II's fancy tricks, including jotting down memos and annotating photos, with your finger instead of a stylus that can be easily lost. And the phone's unique features, if not all perfect, are worthy enough.