How to Save Money As Consumer Prices Keep Rising

With the inflation rate close to a 40-year high, here are some tips on how to cut costs

Consumers continue to be battered by rising prices—the latest inflation numbers remain near 40-year highs—so finding ways to cut costs is more important than ever.

The nation’s main inflation gauge, the Consumer Price Index (CPI) soared at an 8.3 percent annual rate in April, the federal government reported Wednesday. That’s down only slightly from its recent high of 8.5 percent, with steeper food, shelter, and new-vehicle costs among the major contributors.

By comparison, the average inflation rate was just 1.4 percent about two years ago.

Energy costs declined 2.7 percent in April but remain 30.3 percent higher than last year. Food costs are up 9.4 percent year over year—“the largest 12-month increase since the period ending April 1981,” according to the Bureau of Labor Statistics news release.

But even taking out volatile food and energy prices, the so-called core inflation rate was up 6.2 percent over the past 12 months.

Prices have jumped in the past year because of a number of factors, including billions of dollars in government stimulus checks, sharply higher consumer demand, COVID-related bottlenecks in the supply chain, and, more recently, the impact of war in Ukraine on energy supplies.

Consumers have been feeling the pinch for several months. According to a nationally representative survey by Consumer Reports (PDF) of more than 2,000 U.S. adults last October, about 92 percent say they have seen higher prices when shopping for gas, with more than 6 out of 10 saying the increases were large.

More than 80 percent of those shopping for groceries say prices have gone up, with 53 percent reporting large increases.

Some forecasters have been hopeful that inflation may be reaching a peak and could drop over the coming year, but the relatively small declines this month suggest that significant easing may be further off.

“Maintaining a cash reserve can be helpful if larger bills or unexpected expenses come in,” says Douglas Boneparth, a certified financial planner and president of Bone Fide Wealth in New York City. “Keeping track of your cash flow is helpful in navigating any financial environment.”

Here’s what to look for in several key spending categories, with tips for reining in your costs.

The surge in food prices reflected a steep increase in the costs for meat, poultry, fish, and eggs, which rose 14.3 percent over the past year.

To help keep your food budget under control, take full advantage of any promotions to stock up your freezer and pantry.

You can also save significantly by sticking with warehouse clubs and discount stores, such as Costco and Trader Joe’s, as well as private-label brands, says Burt Flickinger III, managing director at Strategic Resource Group, a retailing consulting company.

Another strategy is to scout for food bargains at drugstores and convenience stores. Some outlets are expanding their variety of fresh foods and may offer lower prices than traditional stores.

Prices were driven higher in the past year by surging demand, complicated by supply chain bottlenecks, as well as disruptions as a result of the war in Ukraine.

And so far in May, gas prices have been spiking again, recently hitting a new high of $4.40 per gallon, according to AAA.

“Gas prices are likely to remain volatile through the summer, but they are likely to fall by the end of the year,” says Patrick De Haan, head of petroleum analysis at GasBuddy, a website and an app that help drivers find the best deals.

Meanwhile, you can make the most of options to cut those costs. You can find tips in CR’s articles on saving money at the gas pump and buying cheaper fuel at warehouse clubs.

And if you’re planning a summer road trip, try to fill up in states with lower gas taxes.

“If you check gas prices ahead of time to find lower-cost options, you could save $5 to $10 a tank,” De Haan says.

You can also squeeze more mileage out of your tank of gas by driving evenly, sticking to speed limits, and removing your roof rack, which can create drag. 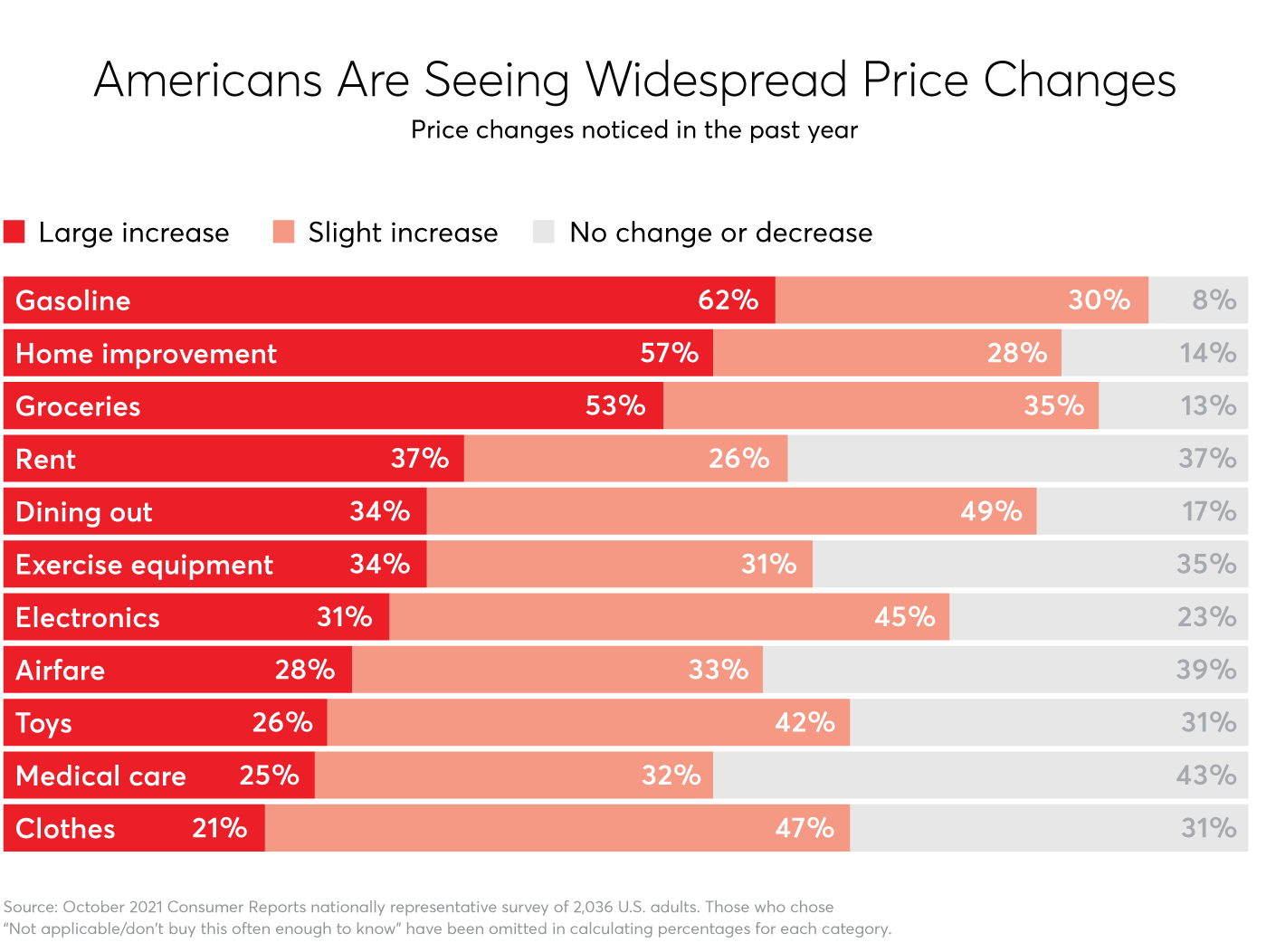 While prices for major appliances slipped 0.8 percent last month, costs remain 12.1 percent higher than last year because of the production and supply chain slowdowns during the pandemic. And a major shortage of appliances to buy still has consumers scrambling to find washing machines, refrigerators, and freezers.

Despite the pandemic easing in many parts of the world, supply continues to lag behind pre-2020 levels, and you aren’t likely to see big discounts anytime soon, says Nish Suvarnakar, senior market analyst at Consumer Reports.

Before you shop, make sure you figure out which appliance features you must have vs. those that are less essential, Suvarnakar says. For example, consider opting for basic stainless steel—a popular finish that is widely available—rather than a specialty finish.

If you’re looking for a new appliance now, be sure to comparison shop at independent retailers—which may offer comparable bargains and perhaps better service—not just at big-box stores. And consider substitutions if your first-choice model is unavailable.

Earlier in the pandemic, telecom consumers had a bit of a break, with prices for telephone and wireless services rising only slightly, while some providers suspended data caps and provided other consumer breaks.

Some providers have started to raise prices and impose data caps once again, with internet service costs up 1.7 percent over the past 12 months, and residential phone service up 6 percent.

To keep a lid on those costs, consider switching to a lower-cost cell phone plan, perhaps one from your internet provider. Lower-income families may qualify for a federal program that helps with internet bills, called the Affordable Connectivity Program.

And although prices are also rising for streaming services, you can still trim your costs by cutting the TV cable cord.

You also might try haggling with your provider. As a recent CR survey of our members found, many have been able to lower their bills by negotiating with their cable or internet company.

Prices for new cars and trucks are up 13.2 percent over the past year, driven by pandemic-related parts shortages and even factory shutdowns, as well as a scarcity of computer chips. Used-vehicle prices have climbed 22.7 percent.

That doesn’t mean you can’t find an affordable option, because prices of individual models vary widely. Take a look at our articles “How to Buy a Used Car” and “How to Navigate Surging Used-Car Prices.”

With so few vehicles on dealership lots, the balance of supply and demand favors the seller, although a few models do have traditional incentives available.

Be aware that although you may get a higher-than-expected value on your trade-in car, those gains may be erased by the higher price you’ll pay for a replacement. Given the shortage of available cars, many people are paying well over sticker price.

“In today’s market, shoppers should be looking for a fair price, rather than a great deal,” says Jeff Bartlett, cars managing editor at Consumer Reports. “Big discounts are a distant memory.”

For a useful benchmark on car costs, check out CR’s Build & Buy Car Buying Service and online research tool, which allows shoppers to check the current transaction prices for different models. You may find that the best way to get the car you want is to order it or buy it from another state.

And to avoid breaking your budget, check out CR’s advice on the best new car deals, as well as our recommendations for fuel-efficient SUVs and affordable used cars you can buy right now.

Consumers enjoyed a break on TV prices over the past 12 months, with costs dropping 5.8 percent. And the latest numbers show prices dipped 2.2 percent.

Generally, the best time to buy TVs tends to be between fall and early winter, when holiday sales begin and the release of new models in January happens, says Samantha Gordon, deals editor at Consumer Reports.

But if you shop around, you can still find affordably priced TVs, such as these bargain 70-inch screens.

Consumer Reports members can get more details about finding the best TV for your money in CR’s TV buying guide.

There are plenty of other ways to save money, and Consumer Reports can help.

For instance, we’ve found that some laundry products—washers, dryers, and detergents—waste money. So here are some tips to avoid them.

We also have a CR Deals site, which lists sales on products we recommend, as well as a monthly column on products that are on deep discount. In May, for instance, you can find sales in 21 product categories, including grills, fitness trackers, and mattresses.

And Consumer Reports members can find out when to buy a whole array of products by using CR’s Best Time to Buy guide.

Editor’s Note: This article has been updated with the latest government inflation numbers.

I cover everything from retirement planning to taxes to college saving. My goal is to help people improve their finances, so they have less stress and more freedom. What I enjoy: walks through the city, time with family, and reading mysteries, though I rarely guess who did it. Follow me on Twitter (@PennyWriter).