Roku 3 first look: Is it good enough to make you upgrade? 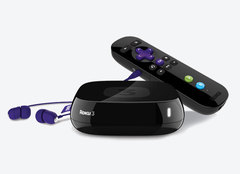 Thanks to a winning combination of solid performance, lots of content, and affordable prices, Roku streaming media players have become a favorite choice of many staffers at Consumer Reports—including me. That's why we were especially interested in taking a first look at the company's newest model, the $100 Roku 3, which replaces the Roku 2 XS at the top of the company's lineup.

Most intriguing was the company's promise that the new Roku 3 is faster than any of its predecessors, and that it has a improved user interface that make it the easiest Roku to use. We put these claims to the test, and checked out one of its unique features: a remote control with a headphone jack for private listening.

What we found in our initial evaluation is that the Roku 3 actually delivers on what it promises, making it a first-choice option for almost anyone looking for a streaming media player not named Apple TV.

For this evaluation, I spent a few days checking out the Roku 3, comparing it to the Roku XD ($80) that's currently in one of my home theater systems. Physically, the two players are very similar, although not identical. The Roku 3 is about the same size as the XD, though the edges are curved rather than square, and its black finish is glossier. The Roku 3 feels significantly heavier than the XD, so it was more resistant to being pulled backward by heavy HDMI cables. 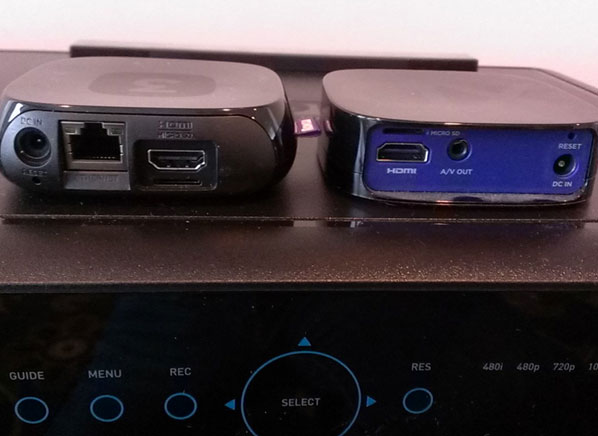 The Roku 3 (left) lacks the XD's analog A/V outputs, but includes an Ethernet jack and a side-mounted USB slot.

While the Roku 3 lacks the composite A/V output included on the XD—which is useful for connecting it to older gear without an HDMI input—it does have a wired Ethernet port for connections to a home network, something missing on the XD. Both have built-in Wi-Fi (though the Roku 3 supports 5 GHz rather than the more crowded 2.4-GHz frequency) and a microSD card slot, but the Roku 3 also has a USB 3.0 port on the side, which can be used for adding a hard drive or playing media stored on a flash drive. 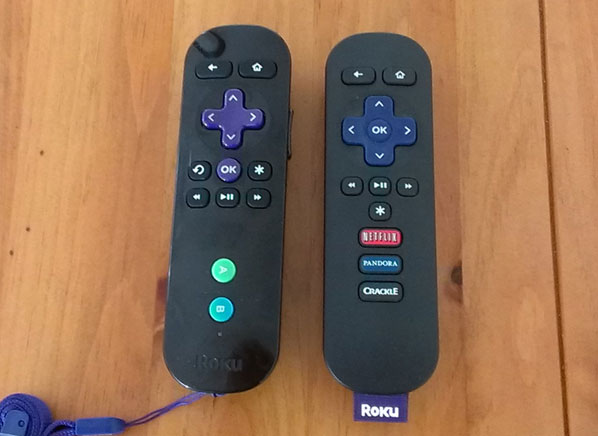 The Roku 3 remote (left) does away with the XD's dedicated content buttons, but has gesture control and A/B game buttons

The Roku 3 remote control is decidedly different from the XD remote; not surprising, it's similar to the one that comes with the Roku XS, since both are game-centric systems. (The Roku 3 comes preloaded with Angry Birds Space.) Like the XS, the Roku 3 has a motion-sensing remote with a built-in accelerometer; you can fling birds toward their pig foes simply by flicking the remote, and use gestures to control characters in other games that support that feature.

Get more guidance on streaming media: Check out our Streaming video and movie rental buying guide.

The Roku 3 remote is also heftier than the XD's (it uses two AA instead of smaller AAA batteries), and it operates via Wi-Fi Direct rather than infrared. (The XS remote connects to the player via Bluetooth.) The Roku 3's remote lacks the dedicated content buttons (Netflix, Pandora and Crackle) found on the XD remote, but it has A/B game buttons. The Roku 3 box has an IR receiver, for those who would prefer to use a universal or learning remote; it can also be controlled with an iOS or Android smart phone via the Roku 3 app.

One of my favorite features of the new player is the headphone jack located on the left side of the Roku 3 remote, which automatically shuts off the volume from a TV or A/V receiver, allowing you to listen privately even when others are in the same room. I wouldn't be surprised to see this feature pop up on other models this year. The player comes with a set of signature-purple earbuds, which I found to be fairly poor-sounding compared with the ones I usually use. But since the headphone input is a standard mini-jack, you can use any headphones you choose, controlling the volume via small buttons on the right side of the remote.

Roku 3 in action. If you've ever owned a Roku, setting up the player should be a familiar—perhaps annoyingly familiar—operation, since you still have to enter a code using a computer. For some reason, it took three tries before I could get the Roku 3 connected to my wireless network. Once connected, the player loaded 21 software updates before it was ready to rock. But when the system was set up, there were no glitches.

Compared with the Roku XD, the Roku 3 seems absolutely fleet-footed, thanks to a new, faster dual-core processor that provides an ultra-responsive feel. Whether you're searching for content, moving through the various channels, or loading Netflix videos, the Roku 3 reacts to commands almost instantaneously. (It's possible that the 5-GHz Wi-Fi also helps to speed things up.) Late last year, the company upped its search capabilities: When you look for a movie or TV show, the player searches across all available channels. To widen the search, you can add more channels, since results are displayed only for those channels that are installed. 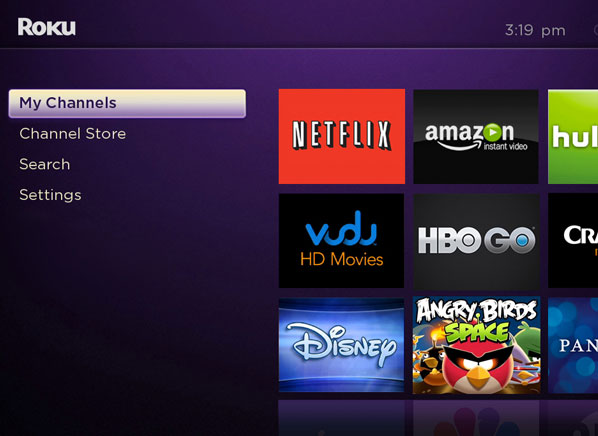 In addition to the faster processor, the Roku 3 features a simpler, more intuitive interface that's a joy to use. It's a definite upgrade from the previous interface, and one that all Roku owners will be able to be able to enjoy sometime in April, when an upgrade for other Roku players is released. The main change is a leap from a scrolling-strip-style menu system to a tile-based one. Now up to nine channels can be displayed at once on the right side of the screen, while a persistent quick-navigation bar—for My Channels, Channel Store, Search, and Settings—is displayed on the left side of the screen.

We've always liked Roku's breadth and depth of content. The Roku 3 can now access more than 750 channels; some, like Amazon, Netflix, and Hulu Plus, as well as Pandora and Spotify music services, are preloaded, while others can be added from the channel store. Notably missing yet again is YouTube, though you can access it indirectly via a third-party apps.

Another thing with Roku is that while HBO Go shows up as an option, DirecTV users can't access this service though the Roku, though it's available on an iPad. And I was surprised to find an app for Blockbuster On Demand, which was pulled from many devices last year by its current owner, Dish Network. Roku also recently added a Time Warner Cable app that lets the cable company's subscribers access live TV and cable shows.

For those who'd like the Apple-like ability to get content from their smart phones onto the TV, you can use the Play On Roku feature of the mobile apps. The solution isn't nearly as elegant as Apple's, though, and content is limited to music and photos, as it doesn't support video.

Bottom line. We're about to start testing a new crop of streaming-media players in our new Streaming Media Lab, including the WD TV Play and Netgear's Google TV-powered Neo TV Prime, but my brief hands-on experience with the Roku 3 left me with a highly favorable impression. The box is fast, the new graphical interface is appealing, and the innovative headphone option on the remote is a standout feature. All these things make the Roku 3 one of the most versatile media streamers you can buy.

For those who already own a Roku device, there's probably not enough reason to buy this new player unless you absolutely hunger for speed, since the interface upgrade will be released soon. It makes even less sense for those already heavily invested in Apple's ecosystem and like access to their iTunes (and iCloud) content and use AirPlay mirroring. But for the rest of us, it looks like the Roku 3 could be the new box to beat.