Battle of the 'super plasma' TVs: the Panasonic VT60 versus the Samsung F8500 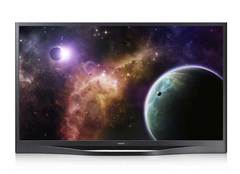 While it's true that LED LCD TVs seem to get all the attention--and the majority of sales--a quick look at our TV Ratings will show you that plasma TVs often top our Ratings, thanks to very good or excellent picture quality, virtually unlimited viewing angles, and an ability to display fast motion without noticeable blurring. In fact, in our 60-inch and over size category, eight out of the top 10 TVs are plasma models.

That's why we were excited at this past CES when both Panasonic and Samsung announced new high-end flagship plasma TV series they claimed were improvements over last year's fine models. In fact, Panasonic now has two high-end plasma series: the VT60, which replaces last year's VT50 models--which were the top-rated TVs in our Ratings last year--and the even pricier ZT60 series, which is not as widely available. Samsung's new top dog is the F8500 series, available in 51- and 64-inch screen sizes.

With our just-posted TV Ratings (available to subscribers), we have now tested both the 65-inch Panasonic TC-P65VT60 and a Samsung 64-inch PN64F8500. (We're just now starting our testing of the TC-P60ZT60 plasma series, which I had a chance to preview a few months ago.) As we expected, both sets--each priced at about $3,400--are attractively styled (though not equally so) and deliver top-notch picture quality along with a wealth of features, including each company's smart TV platform. Both sets have built-in Wi-Fi, a full Web browser, access to an apps market, and access to streaming movies and TV shows from several services. In addition, both sets have built-in cameras for making Skype video calls and more. And both let you send content back and forth between your TV and a compatible smart phone or tablet.

Here's what we thought about each model:

Panasonic TC-P65VT60
The Panasonic's Viera TC-P65VT60, which has a "one-sheet-of-glass" design with an ultra-narrow metal border, is loaded with features, including built-in Wi-Fi and Panasonic's Viera Connect Internet platform, with a full Web browser, an apps market, and access to streaming movies and TV shows from several services. It has the company's new customizable home page that can be personalized with your favorite content, and the updated Swipe & Share 2.0 feature lets you send content back and forth between your TV and smart phone or tablet simply by swiping a finger across the device. With this model's touchpad remote, which includes a built-in microphone, you can use voice commands to control some basic functions, such as search, and there's a voice-to-text feature that can "read" Web content and text messages aloud. This set also has a built-in camera that can be used to make Skype video calls or leave video messages; it can also be used with the set's facial recognition technology to present a personalized home screen for each family member. This model will work with an optional touch pen that lets you "write" in color on the screen, useful for leaving memos or annotating photos directly on the screen. For 3D viewing, this TV comes with two sets of active 3D glasses.

Find the right model for your needs and budget in our TV buying guide and Ratings.

What we liked. Like almost all plasma TVs, this Panasonic has negligible motion blur, and its viewing angle is nearly unlimited--two shortcomings that do affect most LCD sets. Not surprisingly, this set has excellent high-definition picture quality, with impressive image detail, very accurate colors, and great, deep black levels, arguably the best we've seen so far this year. (Great black don't only affect dark scenes; they add visual depth and dimension that makes images pop off the screen.) We think Panasonic did a nice job updating the TV's interface with a customizable home page that can be set up with your favorite content, aided by voice-guided set-up prompts. (Three different templates are included.) 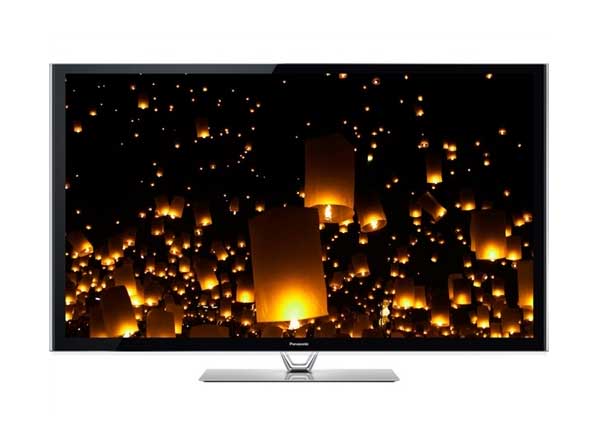 The Panasonic VT60-series plasma stood out for its deep, inky black levels.

We also liked that Panasonic includes both a larger conventional backlit remote control, plus smaller touchpad remote that makes web-based operations and searches easier. Using voice commands for searches is a worthwhile feature, and the Swipe & Share feature makes sending content between your mobile device and TV a simple operation. Also, a new free app (Viera Remote 2) that lets you use an iOS or Android device as a TV remote--available only on Panasonic flagship models--also includes a cool calibration tool that can be used to optimize your picture settings.

What we didn't. While overall picture quality was impressive, the TV is a bit on the dim side once we had it properly adjusted, so it's not a great choice for brighter rooms where you can't control the amount of ambient light. There are other picture modes that can brighten the image, but there are performance tradeoffs. Also, its deinterlacing--converting 1080i signals to the set's progressive display--was only average, so we saw some jaggies, or jagged edges, on objects. But perhaps this set's biggest flaw was its thin-sounding audio quality, which was only fair, a markedly poorer performance than we experienced with the VT50 model it replaces. As a result, we recommend augmenting the TV's sound with an external sound system, such as a soundbar speaker.

If 3D performance is important, this set won't disappoint: its 3D performance was very good, just a notch below the best set in our Ratings, with almost negligible ghosting on images. It took a slight hit when we noticed that that resolution in the 3D mode was 1080i-like rather than 1080p, so we saw some interlaced artifacts, though not everyone will notice them. This model comes with two sets of active 3D glasses, whereas the Samsung provides four sets.

Samsung PN64F8500
If the Panasonic VT60 is reasonably stylish, then the Samsung F8500-series plasma TVs are positively elegant, with a thin dark-gray brushed metal bezel and a unique-looking, super-stylish curved base that runs the entire width of the TV. Befitting is flagship status, the TV is loaded with features, including a quad-core processor, built-in Wi-Fi, and the company's Smart TV Internet platform, with a full Web browser, an apps market, and access to streaming movies and TV shows from several services. This year content--and there's a lot of it--is organized into five main "panels," organized around a type of content (such as live TV, movie and TV show streaming services, social, etc). Like the VT60 this model has a built-in pop-up webcam for Skype calls and face recognition, but it can also be used to recognize hand gesture-based control. The TV's remote also has an embedded microphone for voice interaction.

The F8500 uses Wi-Fi to perform two-way mirroring (showing mobile content on the TV or TV content on your compatible mobile device), and it comes with an IR blaster that lets you control a cable or satellite settop box with the TV's touchpad universal remote control. One unusual feature on this TV--and some other Samsung sets--is a proprietary slot in the back of the TV that can accept an Evolution Kit, a $300 future-proofing module that can be added to the TV to boost its performance and features to match that of newer sets. We haven't yet tested this feature, but plan to in the near future.

What we liked. Like the VT60, the F8500 delivers top-notch picture quality, with among the brightest images we've ever seen from a plasma TV. Like the Panasonic, this TV has excellent picture detail and color accuracy, as well as deep, inky blacks, though just a tad lighter than the VT60. Its 3D performance was also among the best we've ever seen (with full 180p to each eye), and the TV comes with four sets of active glasses, two more than the VT60. Samsung has perhaps the most extensive assortment of online content available in a TV today, and its five-panel Smart Hub interface intuitively organizes all that content. Also new this year is S-Recommendation, which monitors what you watch so it can make suggestions about movies and TV shows. The included IR blaster had a few issues, but being able to control your settop box with a single remote is a plus. We also liked the F8500's design, which made the VT60-series set look dated by comparison.

What we didn't. Although the sound was better on this set than the VT60, it was only marginally so. We'd suggest getting an external sound system, such as a soundbar speaker, if you want audio quality that can match its great picture. We also didn't love the new remote control, which we found hard to use, primarily due to its lack of buttons for common operations and awkward thumb-based operation that takes a while to get used to. However, since we finished testing this set, Samsung started to include a second, more basic remote with this model. An though the company has made some major improvements to its voice interaction, such as moving to more natural-language commands, the gesture-based control--which includes waving and clenching your hands in front of the TV's camera--still feel more like a novelty than a useful feature.

And the winner is...
So, you're probably asking, which is the better TV? By a slight margin, we pick the Panasonic VT60 over the Samsung F8500. The primary reasons are deeper blacks--the best we've seen so far this year--which provide excellent shadow detail, and slightly richer, more accurate colors, especially with flesh tones. That said, the F8500 is an exceptionally bright plasma, making it perhaps the better choice for brighter rooms where you can't control the lighting. It should also be considered if you watch a lot of 3D and don't anticipate using an external sound system. But the truth is that you really can't go wrong with either set, which are pushing the boundaries of what to expect in a flagship TV this year.

View and compare all Televisions ratings.