By Emily A. Thomas, PhD

Parents and others must remain vigilant about the ongoing danger of children and pets dying in hot cars, because heatstroke can be a four-season threat in some parts of the country. About 38 children die each year from vehicular heatstroke, according to KidsAndCars.org and NoHeatStroke.org. Heatstroke is the leading cause of death in vehicles (excluding crashes) for those 14 and younger.

Last year almost 38 percent of the 24 hot car deaths were kids who gained access to a vehicle on their own. Parents working from home while also managing distance learning will need to be extra mindful to keep vehicles locked in the garage or driveway and keys out of children’s reach. Even if you don’t have children, it’s important to take those precautions to protect neighboring families.

If your child is missing, always remember to first check your pool, if you have one, and your vehicle, including the trunk.

It’s never safe to leave a child unattended in a vehicle. Even with the windows cracked or the vehicle parked in the shade, the interior temperatures within the car can reach dangerous levels in a short period of time.

Even on days with mild temperatures, the heat inside a closed vehicle can reach dangerous levels within an hour, posing major health risks to small children or pets left inside, Consumer Reports says.

The first pediatric heatstroke death of 2020 happened on April 25 in Tomball, Texas. A 4-year-old boy was found dead inside the hot family vehicle after sneaking outside and into the car unnoticed. The outside temperature was only 78° F.

CR testing found that even when it was 61° F outside, the temperature inside a closed car reached more than 105° F in just 1 hour, an extremely dangerous and potentially fatal level for a child.

The CR test results help dispel the myth that hot car deaths or heatstroke happen only on blisteringly hot days in the dead of summer.

And the idea that your car’s color can significantly mitigate the heat inside the vehicle is also largely a myth, based on CR testing.

“Children should never be left unattended in a car for even a short period of time,” says Jennifer Stockburger, director of operations at CR’s Auto Test Center. “Even when it’s not that hot outside, our test results show how quickly temperatures inside the car escalate, regardless of whether your car is light or dark.”

And research shows that drivers shouldn’t rely on the shade to cool the cabin, either. Researchers at Arizona State University and the University of California at San Diego School of Medicine evaluated cabin air temperature and surface temperatures in identical vehicles placed in the shade and the sun. Their study estimates that even in a shaded vehicle, a 2-year-old child’s core temperature could reach a dangerous—and potentially deadly—104° F in a little less than 2 hours.

The danger from high temperatures is particularly acute for young children because their bodies heat up three to five times faster than adult bodies, according to the American Academy of Pediatrics (AAP).

Some automakers have begun integrating alert technology into vehicles to remind parents or guardians that they might be leaving a child or pet behind in a vehicle.

On a June day when it averaged 61° F outside during the first hour of testing, the inside of a parked car reached more than 105° F.

CR reported the readings at the end of an hour. But interior temperatures continued to rise as more time passed.

The National Highway Traffic Safety Administration has warned that on a 60° F day—something akin to spring weather—the temperature inside a vehicle can reach a dangerous 110° F over the course of several hours.

Heatstroke risk is a year-round threat in some regions with mild winters, including the South and Southwest.

The chart below demonstrates the rise in vehicle cabin temperature when CR tested the two sedans on a July day. 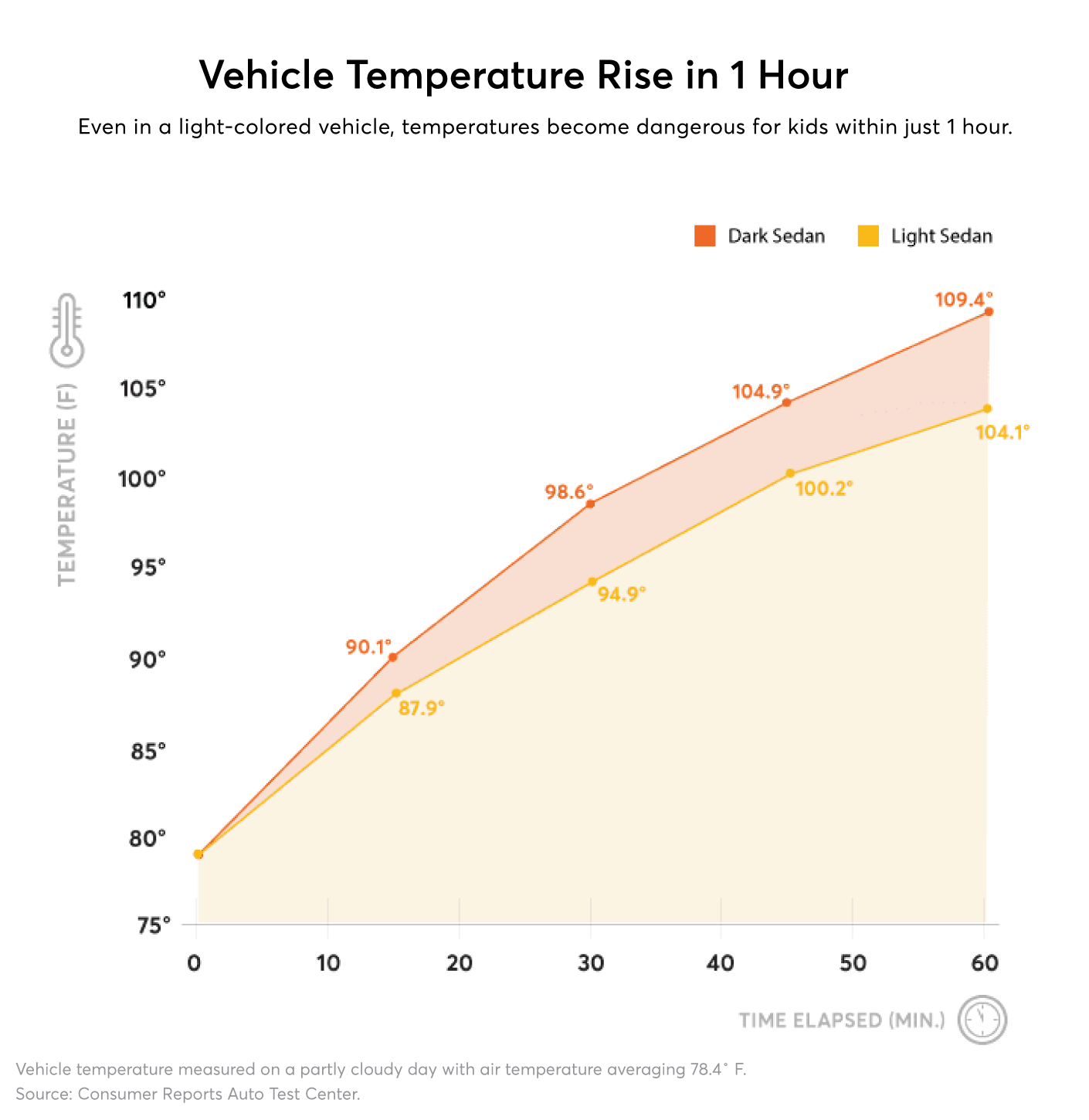 Why Cars Heat Up

Closed cars get hot quickly because sunlight heats up inside elements, including the dash, upholstery, and steering wheel, according to NoHeatStroke.org. Those elements radiate their heat into the air, increasing the ambient temperature inside the car.

Why don’t cracked windows help enough? Partly opened windows allow some heat to escape, says Jake Fisher, senior director of auto testing at Consumer Reports, but as long as the heat source (the sun) continues to beat down and heat up the inside car elements, the temperature can stay dangerously high.

Vehicle-integrated heatstroke prevention technology has become commonplace in many brands.

In 2017, GM was the first to implement a door-logic-based rear-seat reminder. Other manufacturers, such as Acura, Ford, Genesis, Honda, Hyundai, Kia, Nissan, Toyota, and Subaru, have followed suit. (See our guide to rear-seat reminder systems for a full listing of all vehicles that have these integrated technologies available.) Door-logic systems recognize when a rear door has been opened before or after the vehicle has been started. It also provides a reminder alert at the end of the trip.

A recent waiver from the Federal Communications Commission to allow the use of radar technology within a vehicle’s cabin has the potential to take these systems to the next level of occupant detection. Hyundai, Kia, and Genesis already offer ultrasonic sensors to detect motion in select vehicles after the driver exits and it has been locked, in addition to the door-logic reminder alert.

Consumer Reports believes that automakers should integrate features that remind adults to check for children in the back seat, and get the technology into as many models as they can, as soon as they can. Aftermarket products can fall short because they still depend on adults recognizing the risk and taking some sort of action.

Acura, Ford, General Motors, Honda, Hyundai, Kia, Nissan, Subaru, and Toyota have demonstrated that integrated preventative solutions are possible, even if they haven’t been perfected. CR will continue to evaluate those and other technology as they emerge, and advocate for the widespread adoption of simple, reliable, and effective back seat occupant alerts to be integrated into all new vehicles, says David Friedman, vice president of advocacy at Consumer Reports.

“Having something that is in the vehicle that is a default, that you would have to opt out of, is the right way to go about it,” says Elizabeth Murray, DO, a spokesperson. “These are not people making malicious decisions to try to hurt their children. These are terrible accidents that are happening, so if we can make it default to take any human error out of it, then that is the right decision.”

Just how hot can the inside of a car get? On the “Consumer 101” TV show, Consumer Reports expert Emily Thomas, PhD, shows host Jack Rico how rapidly interior temperatures can rise—and what you can do to protect your kids.

At Consumer Reports, I've found the perfect blend for my love of injury biomechanics, forensics, and kids as an automotive safety engineer for child passenger safety. For me there's no greater reward than helping families keep their little ones safe and coming home to put my advice into practice with my own precious little boy. Between church activities, my big Indian family, and exploring new places with the hubby and baby—my life and my heart are full.