By Perry Santanachote and Paul Hope

When you shop through retailer links on our site, we may earn affiliate commissions. 100% of the fees we collect are used to support our nonprofit mission. Learn more.

Over the course of Wing Madness, our tasters admirably battled their way through 18 pounds of chicken wings, 5 cups of Frank’s RedHot sauce, and more butter than we’re comfortable admitting—all in the service of determining, once and for all, the best way to cook hot wings at home without a deep fryer.

Three weeks ago, we began this tournament with a field of 16 cooking methods, and only two contenders remain. Some very popular cooking methods have had to head home, leaving just Air Fry and Boil + Broil, No Rack, to duke it out in the championship.

Besting the grill in the Fiery Four was a notable win for the air fryer, but beating out a powerhouse team from the range?

That would unquestionably raise the air fryer’s profile. Everything’s on the line.

Boil + Broil is a strong contender that has already whooped three conventional methods (roasting, grilling, and baking) to get here. It’s a method that has historically shied away from the spotlight, so we’re excited to see it come so far in this tournament.

These wings have nothing to lose, which always makes for an exciting matchup.

It was a heck of a showdown. Both methods put up flawless performances.

Right, so which of the nonfried wings came closest to this perfection?

In overtime, the air-fried wings won with a thunderous dunk, defeating the range just like it did the grill. It was a close one, and we still love the boiled-and-broiled wings, but the air fryer was faster and more convenient, and it proved to be less of a fuss when it came time to clean up.

Here’s your “One Shining Moment,” air-fried wings. Cut down the net, baby. 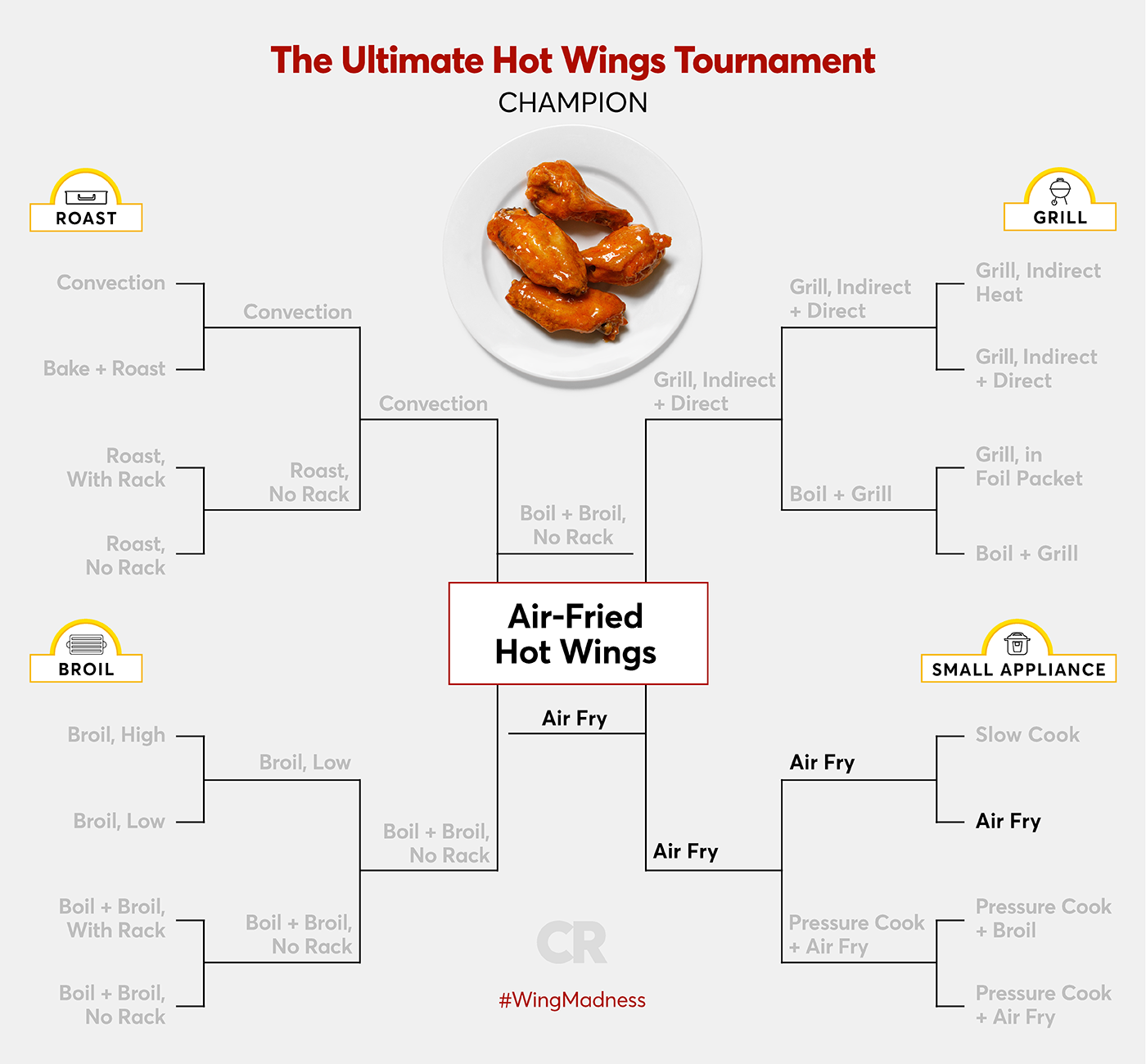 The takeaway: If you have an air fryer—or you’ve been on the fence about getting one—it’ll turn out the next best thing to deep-fried wings.

It’s true that air fryers use the same convection technology that ovens do, but the air fryer’s small capacity and special basket allow more hot air to circulate around the food, allowing for more even browning, faster. Here are three top performers from our air fryer tests, listed in alphabetical order, that are a cinch to clean.

And if an air fryer isn’t in the cards, or you plan to host a larger gathering in the future (an oven can cook more than twice as much food as a standard air fryer), your range will get the job done using the Boil + Broil, No Rack, method that had an impressive run.

Here’s how to boil and broil wings: